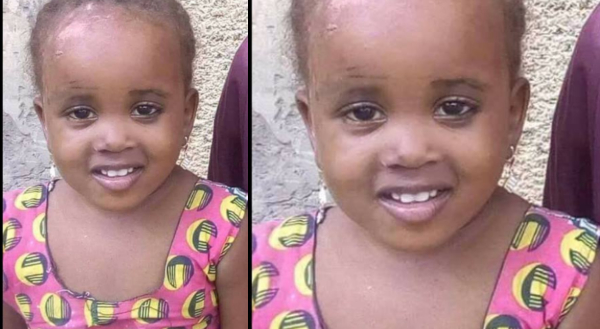 A 4-year-old girl identified as Zainab Auwal Ustaz, was reportedly kidnapped during a wedding ceremony in Azare, Bauchi state.

The little girl’s heartbroken father who has reported the kidnap incident to the police, alleged that she was abducted in front of their house during a wedding ceremony in the area yesterday. His is asking for information, that might make his little girl regain her freedom again.

This report is coming just after the Bauchi State Police Command, announced that it arrested 15 suspects for various offences across the state ranging from kidnapping, murder and armed robbery. The Police Public Relations Officer of the Command, Kamal Abubabakar, while parading the suspects before newsmen in Bauchi at the Command’s headquarters, said that the suspects were arrested at different locations across the state.

He said that on July 10, 2018, at about 4pm, a team of Federal Special Anti-Robbery Squad (FSARS) Bauchi, who acted on credible intelligence report, arrested two suspects who were in possession of pump action gun and a cutlass.

He gave the names of the suspects as Yakubu Adamu, male, (23) and Dalha Mamman, male, (42), all of Burga Village in the Tafawa Balewa Local Government Area of Bauchi State.

Kamal, a Deputy Superintendent of Police said, “The suspects had on 19/02/2018, stormed the residence of one Ahmadu Adamu, male, (65) of Zungur Dutse Village, Bauchi LGA and robbed him of his phone.

“They thereafter shot him dead and kidnapped some women to Tashan Mai-Alewa mountain where they raped them repeatedly and demanded N1m as ransom before releasing them.”

JUST IN: Suspected kidnapper of Kaduna lawmaker killed at crossfire