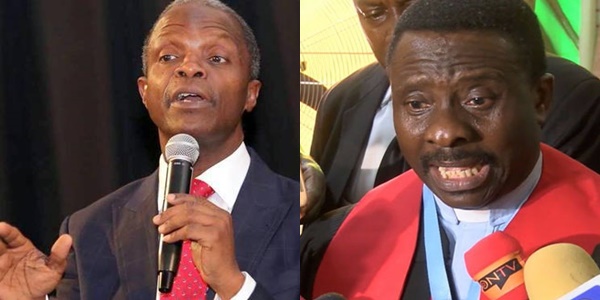 A few days ago, acting President Yemi Osinbajo hit out at churches that preach only about prosperity and don’t talk about corruption.

Osinbajo had stated “Very rarely do you hear our preachers talk about corruption from their pulpits. If a nation is not righteous nothing will help it.”

Speaking in response to this, CAN President, Rev. Samuel Ayokunle, said that the acting President was well within his rights to speak about this. He did state, however, that churches do speak against corruption and that they aren’t all about prosperity.

He said: “Being a pastor, the acting president may know what we don’t know and he has a right to correct those whose teaching or preaching contradicts the scripture.

“What we know is that the church must speak against evil in the land, corruption inclusive. The church has been speaking against the perceived genocide in the country, insecurity of life and property, hypocrisy, nepotism, greediness, tribalism, favourism, treasury lootings, lopsided appointments, etc.

“These are all manifestation of corruption. Corruption goes beyond greed and diversion of public money into personal hands. Whether our leaders, politicians and civil servants are listening is another thing entirely.

Stop disinformation that can divide Nigeria, Presidency tells CAN


“Those who have not been preaching against the evil in the country should heed the counsel of the acting president and the leadership of CAN in turn tasks those in the position of authority to be sensitive to the yearning of the church for peace, security, job opportunities, good roads, affordable medical care, and an end to every form of hardship in the land.”

DJ Cuppy shares romantic video with her boyfriend, Asa Asika as he celebrates his birthday (Video)

“Reekado Banks has no beef with Kizz Daniel”- Manager reveals

CAN denies COZA solidarity visit, says pastors visited on their own

COZA Scandal: Any man of God who can’t control his libido shouldn’t go near pulpit —…

CAN Reacts To Rape Allegation Against Pastor Biodun Fatoyinbo

With you by my side, I’m ready for the next 4 years — VP Yemi Osinbajo tells wife

VP Osinbajo’s children, Kiki and Laolu can’t contain their joy as they…