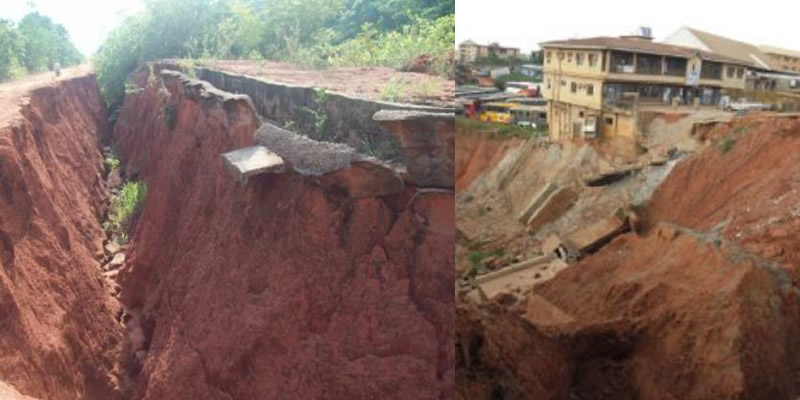 According to an environmentalist and native of Nanka, Mr Ikenna Ezenekwe, the landslide caused panic in the area, forcing residents to flee the place.

He said,”There was panic in Ubaha village of Nanka community when residents fled over a minor landslide.

“Residents vacated the community over the fear of a possible major follow up due to the landslide which occurred after a downpour at night which caused a portion of the land to cave in.”

Our correspondent gathered that nobody died in the incident.

While calling for an urgent intervention by the relevant authority, Ezekwe said, “The rainy season of 2018 has reopened old wounds.

He said,”The people of Nanka who had suffered untold hardship in the hands of landslides are once again faced with another threat.

Ezenekwe who is the Nigeria coordinator of a New York-based nongovernmental organization, the Rural Communities Development Initiative, added,”Nanka presently dangles on the verge of another catastrophic landslide should immediate prophylactic measures are not taken by the government.

“Two minor landslides occurred in the village of Ubahu Nanka dividing the village into two halves.

“The land belonging to the families of Ezeagwuogbo was abandoned by the family resulting from the landslide. Other families in Ubahu were also affected.

He said, “Our governor needs to come closer to Nanka and see the problems firsthand. Nanka people are leaving on the edge.

He said the community was sitting on what he called a ticking time bomb, stressing that “The fault lines which are precursors to major landslides are already visible within the community. The big one can happen anytime from now. The government should be ready.”