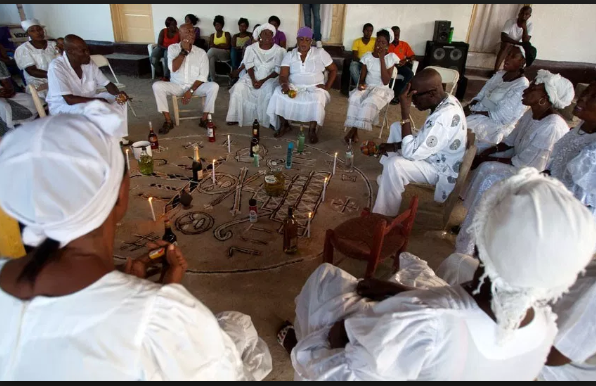 It was a shocking moment as six pupils, one male and five females alleged of witchcraft confessed uncontrollably in Danjuma area of Akure, Ondo state capital.

According to Mercy-Babs Communications, it was gathered that Idayat, one of the oldest among the six, while being interviewed by journalist Omo Edema, confessed to have initiated her sister and the four others into witchcraft. How did she come about witchcraft? She said an elderly woman neighbour in their previous house initiated her a long time ago.

“I can’t remember the year I was initiated into witchcraft, but can remember I joined them in the house we were living before at Idole, Akure.

“One day a little girl like me then came to me and said I should accompany her somewhere which I obliged. She took me to an elderly woman where they gave me biscuit and groundnuts. I ate them there. Immediately I finished eating those things, they commanded me to go and begin to bring people’s glories to them”, Idayat said.

When she was asked how many glories had she been able to submit to them, she said she only took the glories of her parents to them.

“I have not collected many glories. I have only taken the glories of my mother and father to them”, Idayat said without mincing words.

In her shocking revelations, the alleged witch confessed that a neighbour and member of the group identified as Unice had collected the glories of the whole house—an upstairs said to be about twenty rooms.

“I didn’t touch anybody in this house. Eunice was the one who collected their glories. I and Eunice are highly ranked in our coven. We both possessed four different birds each in our bellies”, Idayat confessed.

tp
Idayat said all the witchcraft birds in her belly were used for afflicting her parents for punishing her for her wrong doings.

The daughter of a Muslim cleric (Alfa) said they normally converge for their witchcraft meetings at available uncompleted buildings.

Idayat’s younger sister, Kudirat also confessed to be a member of the group. According to her, she also concentrated her wicked afflictions on her parents too.

The mother of the duo, Anuoluwapo had earlier spoken with Omo Edema and blamed the matter on the father of the children who she said had failed in his true parenting. The mother of three confirmed that her Alfa husband was insensitive to his children, adding that he had left home without a genuine reason.

Eunice and all other alleged members of the coven confessed and confirmed their witcheries. On how they take people’s glories from them, they said they would fly in the spirit realm to carry the urine of their targets to their meeting which, in turn, would deprive them (targets ) of their glories.

Their live confession was aired on ILE-AYE radio programme on Voice 89.9FM, Ado-Ekiti.