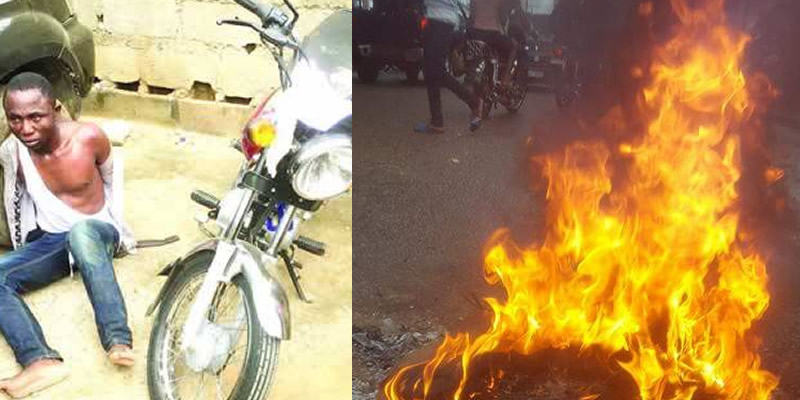 An eyewitness, who gave his name as Cornelius, said the incident occurred by 4:30am and the suspect’s name was given as Emmanuel, from Akwa Ibom State, who lived and did business as an Okada (motorcycle) rider in Ikom local government area.

Another eyewitness, Bojor Okongor, said the victim was trying to forcefully snatch a motorcycle from the owner at gunpoint when he met his Waterloo.

“The Victim was a motorcyclist (Okada man) by profession, named Emmanuel, from Akwa Ibom, and a resident of the same neighbourhood where he was caught trying to forcefully snatch a motorcycle from the original owner with fire arm and a knife.

“But he was so unfortunate and he’s to pay with his life for all his atrocities. He was caught, beaten to pulp and immediately burnt to dead by the angry Youths.

“I condemn this in its totality. No matter what, we should stop taking lives we can’t give and also say no to crime.”

When contacted on phone on Friday, the Police Public Relations Officer, Ms Irene Ugbo confirmed the incident, and said the police had warned residents against taking laws into their hands.

According to her, “We’ve always told them not to indulge in Jungle Justice, because jungle justice is an offence by the law. Anybody being caught will be arrested and charged for murder.

“We’ve given this warning several times – it’s just that when these things happened, you know Police cannot be everywhere at the same time and before Police will move in there, this people might have taken the laws into their hands and the damage done already.

“So, what we preach and will continue to preach is that, anybody being caught would be arrested.”

Ms Ugbo promised to use the media and other stakeholders to sensitise the general public on the implications of jungle justice.