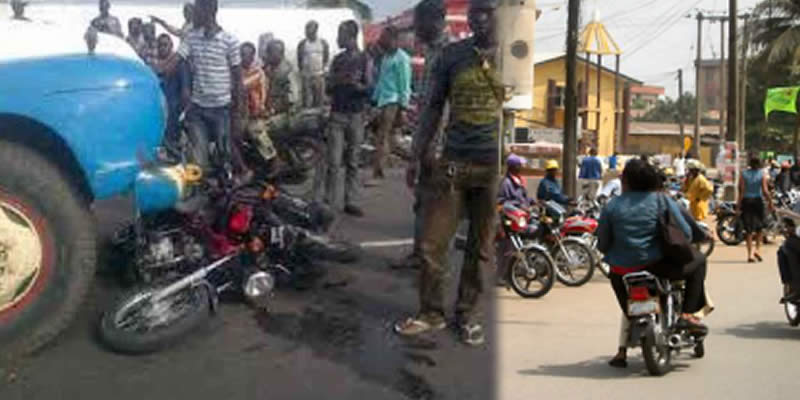 Okada rider crushed to death by a truck in Ogun State

A commercial motorcyclist has been crushed to death in an accident involving two trucks and a  Mercedes Benz car at Ifo on the Lagos- Abeokuta Expressway today.

Mr Babatunde Akinbiyi, the Public Relations Officer of the Traffic Compliance and Enforcement Corps (TRACE), confirmed the incident to the News Agency of Nigeria in Abeokuta saying a Mack truck without registration number and a  Mercedes Benz car marked EG 283 KJA had earlier been involved in an accident on Sunday night and had been left on the highway.

The TRACE spokesman said the driver of a Iveko truck marked AAA 921 XA, who was travelling early Monday  morning, lost control of the vehicle and crushed the motorcycle registered as FKJ 880 QB  against the two stationary vehicles.  The commercial motorcyclist was said to have been killed on the spot.

READ: Photos of Eight Edo indigenes returning from Spain who died in accident along Lagos-Ibadan Expressway

“The accident happened around 5 a.m. at the Old Bank road in Ifo inward Abeokuta,” he said. He said the corpse of the motorcyclist had been deposited at the morgue of the General Hospital in Ifo. Akinbiyi added that the driver of the Iveco truck, as well as other vehicles and motorcycle involved in the incident, had been moved to Ifo Divisional Police Command.

Dbanj, 2face takes their wives for ‘baecation’ in Dubai

Driver runs off after allegedly crushing one of his passengers (Photo)