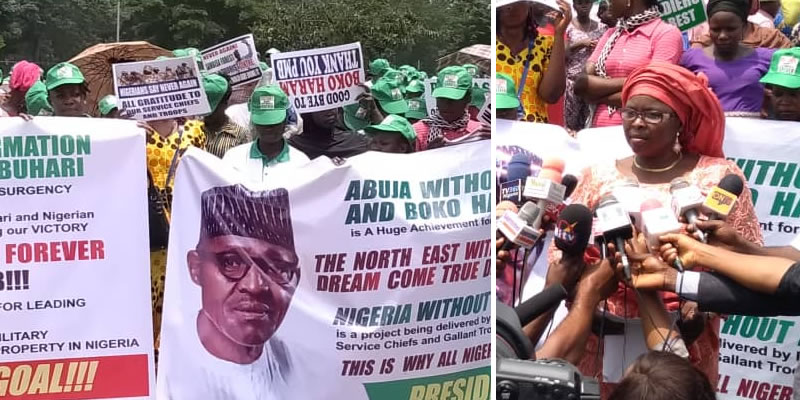 .... laud’s military on welfare of personnel

Hundreds of Women this morning besieged the Presidential Villa, Abuja to appreciate the efforts of President Muhammadu Buhari towards ending Insurgency in the North Eastern part of the Country.

The Women who marched under the aegis of the Coalition of Nigerian Women for Peace carried various placards with inscriptions such as “Boko Haram is gone forever, we thank PMB, Abuja without bomb and Boko Haram” among others were full of praises to the present administration for restoring peace to the North East.

Led by their Convener, Jaiyeola Mohammed, the Women said despite threats by some persons four years ago, the will of God and the votes of Nigerians made President Buhari win the election and he became President at a time that Nigerians can barely step out of their homes for the fear of becoming victims of Boko Haram terror attacks. 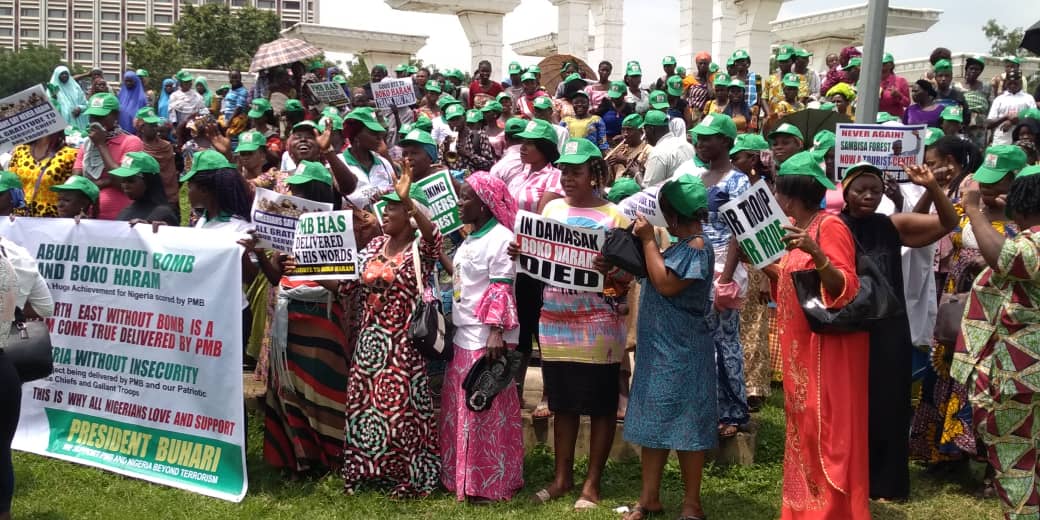 Mohammed said, “We recall clearly those dark days when no one feels safe even inside Abuja, the nation’s capital. The roads leading to major institutions were sealed off to effectively convert most of the major roads into cul-de-sacs and two way roads where there were originally dual carriages.

“The situation was so bad that those the citizens should look up to for protection cordoned themselves in with concrete barriers as they fear for their own lives from Boko Haram.

“The reach of terror was speeding south and has spread as far down as Okene in Kogi state where the group had established cells.

“There was even an attack on troops’ convoy going through the state. Kaduna, Kano, Adamawa, Yobe, Gombe, Nassarawa, Plateau, Niger and other neighbouring states were practically in the grip of terror as the extremists had brought themselves to a point where they could strike in any of these places.

Mohammed said it is on record that those that had vowed to make the country ungovernable did not relent in trying to use Boko Haram to actualize that threat. 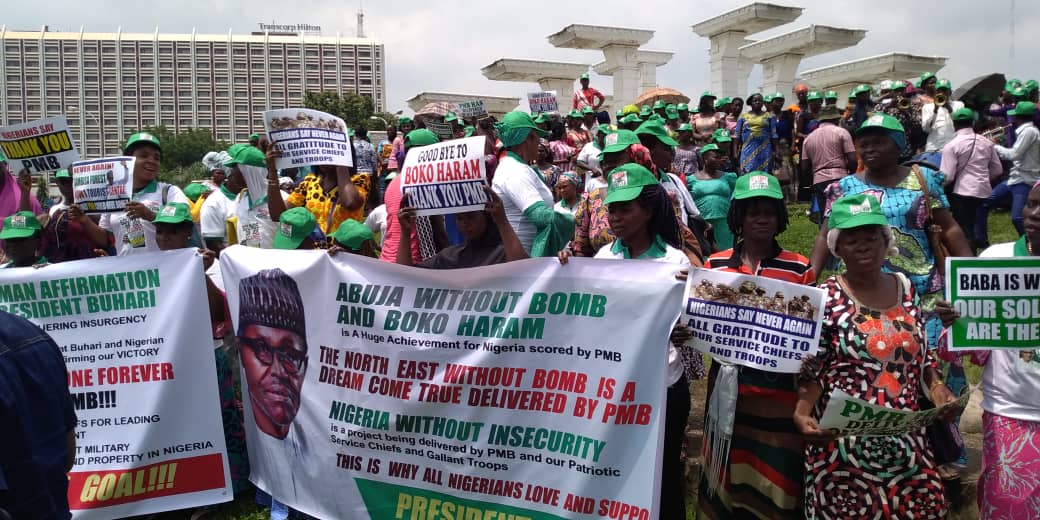 She said they gave material, intellectual, political and tactical support to the terrorists all in their bid to keep the killers in place and torment the rest of us, law abiding citizens.

She said, “Thankfully, the military has been up to the task. The Nigerian Army has repeatedly trounced and punished the Boko Haram terrorists, living them no hiding place, chasing them from the aforementioned states into Sambisa Forest from where they have been chased into the desert; whatever remains of the group is being hunted down and dispatched from being able to terrorise the citizens anymore.

“The Air Force has seen to it from the skies that the terrorists have no hiding place. The Navy is perishing their thoughts of turning Lake Chad into a haven. The Intelligence Network is keeping itself several steps ahead of them. The ones with hope are Nigerians who will again live without the fear of Boko Haram terrorists.

“This is why we are glad when the Chief of Army Staff (COAS), Lt. Gen. Tukur Buratai declared that the Army is tightening the noose around the pockets of Boko Haram remnants that continue to attempt showing off about being viable. General Buratai’s explanation as to how the few attacks by these pockets do not signal a resurgence is reassuring.

” This is contrary to the hype being promoted by the sponsors of these killers that they are on the rise again. We have seen through this trickery of these sponsors sending their fighters to carry out occasional attacks and then use this to ramp up fear among the population. The Nigerian Army is the expert in this matter and it is their assessment we will believe.

“However, even before General Buratai gave his assessment that the areas left to root out this evil from is Northern Borno, we had done our own homework and concluded that Kano, Kaduna, Adamawa, Kogi, Yobe, Gombe, Niger, Nassarawa and other states have not only become safe but are also concretely beyond the reach of Boko Haram. Abuja that once wore a chain of barricades has become a thriving city where Boko Haram is only discussed in the context of news reporting of successive military gains over the group.

“These are positive results that come from the sleepless nights that the military chiefs, like their Commander-in-Chief, President Buhari has been having to safeguard everyone. Mr. President’s careful selection of these Service Chiefs who have their eyes on the job and the success of the country, has paid off. It is something that we cannot thank him for enough.

“We commend the Service Chiefs for making a departure from the era when protector hide behind concrete barricades while terrorists decimate citizens. We have seen how these military chiefs let their troops right in the trenches and are able to share their experiences. This must be why they are able to fully implement every single one of Mr. President’s instructions. This include the dedication with which they translated President Buhari’s anti-corruption stance to reflect in the military where this has resulted in improved welfare of troops.
Equally important is the focus that has allowed the military rise above the distractions that have been thrown in their path as obstacles to distract them and allow Boko Haram thrive.

” The distraction of “Killer Herdsmen” that was variously used as a political tool and cover for some Boko Haram fighters to operate has been dealt with. The military has also successfully nipped in the bud the attempts by the detractors of the country to deploy separatists and extremist groups to derail their focus on defeating Boko Haram.

“The pace at which peace and security is being restored in the past three years plus has phenomenal considering where we are coming from. Nigerians want more of this peace and security as it is never enough anywhere in the world. Mr. President and his Service Chiefs have been proven that they have been tested and found to be trustworthy in all ramifications. It takes people that genuinely have the interest of the citizens at heart to perform such feat.
Our rally today is therefore to say a big thank you to Mr. President and his Service Chiefs in the firm belief that this will spur them to do even more for the country.

“Our expectations are that this show of appreciation will push the military to pulverize whatever is left of the terrorists, who must be chased into the direst and hottest part of the Sahara Desert. We are aware that there have been several calls on those remaining to give up their evil ways and they refused to repent, we therefore have nothing against the military unleashing disproportionate force to flush these recalcitrant remnants out of existence”she concluded. 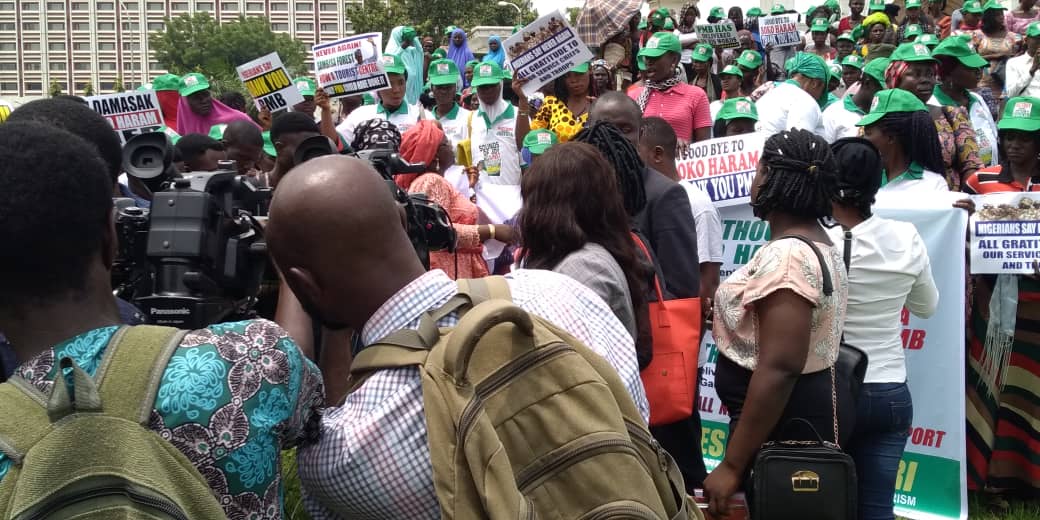