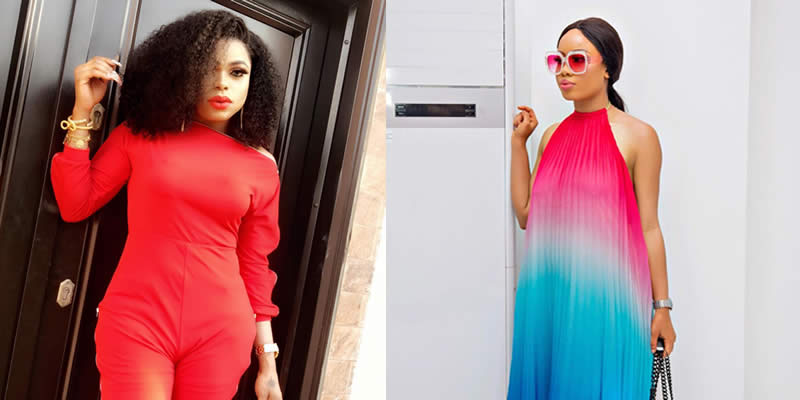 Bobrisky Threaten to beat Nina if she “badmouth” him

Famous Nigerian cross dresser Bobrisky has it bad for BBNaija’s Nina. Just when it seems like the the drama between the two is over, Borbisky reignites the smoke. In a recently released audio, Bobrisky can be heard threatening to beat up Nina if she talks bad about him

It’s old news that Bobriksy is a trouble maker and never shies away from drama and chaos on social media. What is surprising however, is watching the male barbie switch from love to hate for one human being.

The BBNaija Double Wahala edition was parked with a lot of drama and months after its conclusion, it is still keeping people entertained. During the show, Bobrisky was seen boasting for his love for Nina and even campaigned for her with his energy and money.

It quickly changed to a different story when the ivory housemate left the house. Her relationship with one of Bobrisky’s apparent enemies, Toyin Lawani, put the cross dresser off and drama began.

READ: Tunde Ednut and Bobrisky trolls Nina, talks of returning the phone he gifted her (Photo)

First, it started with his calling her ungrateful after he used his connections to get an iphone X and Nina boldly stated that she’s willing to return the phone to his choice of location. That really hurt the male barbie who must have thought he bought her soul.

It escalated when he kept calling her names and insulting her on the gram. Trying to build her brand and stay out of trouble, Nina ignored. Just recently, Bobrisky showed just how pained of the whole thing he is. In an audio now circulating the internet, he can be heard threatening the beautypreneur.

Audio: I will beat and naked Nina if she says trash about me- Bobrisy threatens

Bob who proudly revealed he was raised in Mushin stated that he will beat up Nina and even strip her if she she ever says anything about him.

Meanwhile, Nina is yet to respond to the threat. Lets wait and see. But you might like this too; Reno Omokri drags lady who accused him of cheating over a controversial post