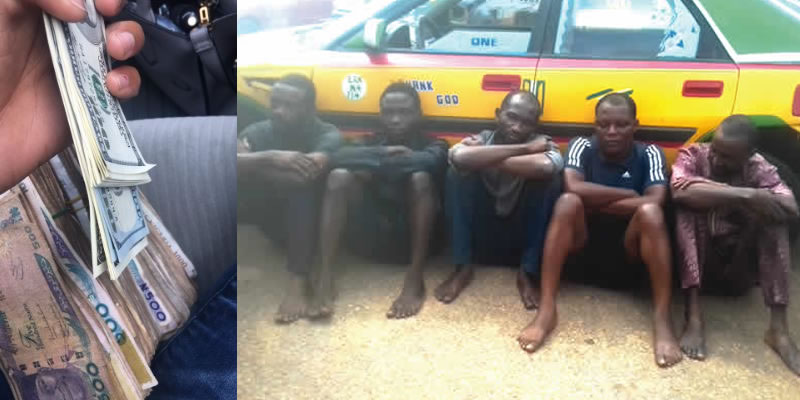 The Kwara State Police Command has arrested five members of a fraud syndicate that specialises in producing fake foreign currencies.

It was learnt that the operational vehicle of the suspects, a Mazda 323 with the number plate, FUF 646 XA, painted in Kwara taxi colour, was also recovered by the police.

Our correspondent gathered that the suspects usually operated in threes. While one would act as a driver, two others would pretend as the passengers.

It was learnt that they would target good-looking persons waiting by the roadside for a cab.

After their victims had boarded the cab, they would initiate a discussion on mass production of foreign currencies.

It was said that the passengers, having got enamoured with the gimmick, would show interest in the “business.”

They would subsequently pay the driver millions of naira in exchange for the purported mass foreign currency production only for them to later realise that the currencies were fake.

The suspects, Sesan Oguga, Owoyemi Gbenga, Sebile Oluwafemi, Adebayo Akeem and Ayoola Issac, were paraded on Wednesday by the state Commissioner of Police, Bolaji Fafowora, at the state police command headquarters in Ilorin.

Fafowora raised the alarm that fraudsters had devised new means of swindling money out of unsuspecting members of the public, advising people to be wary of the vehicles they boarded.

READ: SAD! 2 Fake prophets killed lover, mother of one for ritual in Lagos

The CP stated that the syndicate specialised in defrauding innocent commuters of their money in exchange for fake foreign currencies.

He stated that the suspects had defrauded two victims, Mrs. Adekeye Feyisayo of N1.055m and Bilikis Abdulkareem and five others victims of N3.5m.

He said, “The suspects pretend to be taxi operators and defraud their unsuspecting passengers. Their operational vehicle, a Mazda 323 with registration number, FUF 646 XA, Kwara taxi colour, has been recovered.”

The CP also said the command had arrested some suspects for illegal possession and repair of firearms.
He explained that some suspects were equally arrested for armed robbery, cultism, vandalism of transformers, as well as armoured cables and drug peddling.
Fafowora said, “Nineteen suspected armed robbers and thieves were arrested. Eleven suspected cult members were equally arrested within the last two weeks. Members of the public are advised to continually make information available to the police and be vigilant of happenings around them.”

One of the suspected fraudsters, Adebayo Akeem, said the gang usually went after greedy people by luring their victims with foreign currencies.

He said, “Those people that have ojukokoro (greedy people) are the ones we collect money from. We have dealt with two people. At times, we connive with the aides of rich people to defraud them.”

The Commandant of the corps, Ibrahim Abdullahi, disclosed this in an interview with the News Agency of Nigeria, on Friday in Maiduguri.

Abdullahi said one Bukar Goni, a 40-year-old bricklayer, found the counterfeit notes in an uncompleted building in the estate on September 16, 2018 and reported to the command.

Goni said, “Preliminary investigation by our personnel revealed that the notes have the same serial number. Also, some of the stakeholders from bureau de change, said they had noticed the fake currency in circulation some months ago. We have put our men and other sister agencies on notice of the trend.

“We believe they are trying to bring in this fake currency to destabilise the economy of the state and defraud unsuspected persons.”