The pastor identified as Charles Kalombo, was exposed by one of the married women’s husband, after he saw the disturbing pictures and videos of the pastor on his wife’s phone. He then decided to make it public so as to shame the pastor.

The pastor who is also an elder in Bread of Life Church, Chingola branch in Zambia, has come out to apologise to the church, the overseer Bishop Joe Imakando and also to the nation at large.

“I am very sorry for sending those nude pics to a married woman it was just a mistake” he said.

” The Bible says knock and the door shall be opened, seek and you be given and today I stand before you seeking for your forgiveness. I know I am a disgrace to Bishop Joe Imakando but please forgive me.” said Elder Charles. 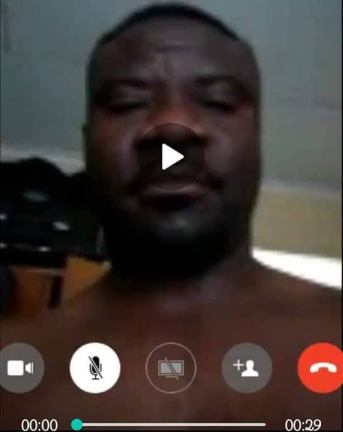 He termed the act as the ‘work of the devil’ as it was not his intentions to send such things, claiming the pictures and video were sent by mistake. The pastor further apologised to the husband of the wife who had the nudes on her phone.

“She doesn’t know anything and it was not her fault but my mistake as I wanted to send them to my wife but mistakenly went to your wife”, he apologised.

SEE: Photos of Pastor David Elijah showing of huge cash before his attempted assassination in Anambra

Although, it has been claimed that the police is now involved in the case and has arrested the pastor over the nudes that went viral. Police Chief Charity Katanga, said she will not tolerate nudity and nonsense in her province.

“Report regarding making and circulating obscene material occurred between September 18 and 3rd October 2018 at unknown time and place in which Charles Kalombo aged 44 years of house number 54 A, Chingola, an operator at Sasol Nitrol (Z) Limited, also an elder at Bread of Life Church. The same has been picked in connection to the allegation. A warn and caution statement recorded and detained on 5th October 2018 at Central Police to help with investigation”, said the Police Chief, Charity Katanga.