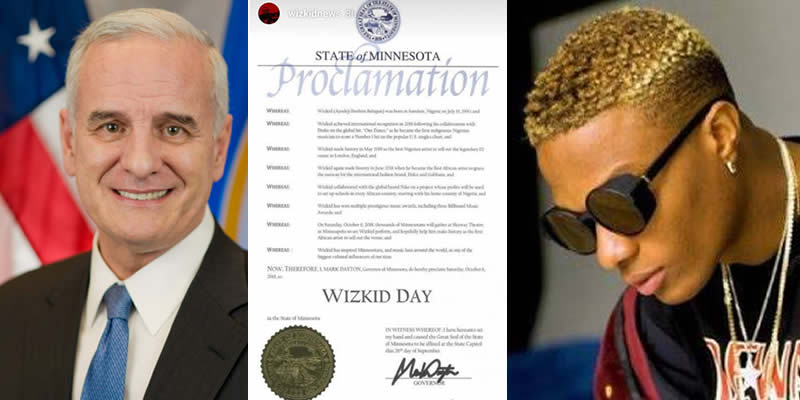 Minnesota government yet to issue official statement on Wizkid Day

Despite the hoopla that has trailed the allegation on the social media, the State of Minnesota, U.S., has yet to issue an official statement about the alleged declaration of October 6 as Wizkid Day.

According to trending tweets and video, sensational musician Ayo Balogun, aka Wizkid, was honoured with a day in the American state, where he performed at the Skyway Theatre on October 6.

According to The PUNCH investigations, whenever the State of Minnesota makes such a proclamation as is being claimed by Wizkid and his teeming fans, it is usually gazetted and reported on the state’s website via a dedicated URL.

Again, official letters issued to Taylor Swift and Beyonce, and published on the state’s website, were dated the same day they got the recognition, unlike Wizkid’s letter which was dated September 26th while the Wizkid Day is declared as October 6.

Meanwhile, Wizkid has yet to upload a copy of the purported certificate on his social media pages as of the time of filing this report.

READ: US Governor Declares October 6 of Every Year As ‘WIZKID Day’

The latest artiste to be honoured with a day is Taylor Swift, and the proclamation was dated August 31, 2018, the same day officially allotted as her day.

See a screenshot of the search of the Minnesota Government website:

The only other artist in the world to have such a distinction in Minnesota is @Beyonce ? pic.twitter.com/iC8RMC0zF3