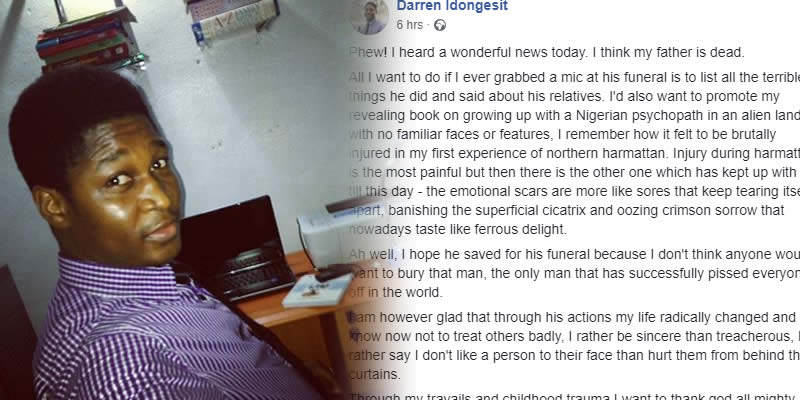 A Nigerian man identified as Darren Idongesit is rejoicing after receiving news of his abusive father’s death.

According to the young man, his father, a pastor, was so abusive and left him with physical and emotional scars.

He referred to his father as a “Nigerian psychopath” and said he is the “only man that has successfully pissed everyone off in the world.

Phew! I heard a wonderful news today. I think my father is dead.

All I want to do if I ever grabbed a mic at his funeral is to list all the terrible things he did and said about his relatives. I’d also want to promote my revealing book on growing up with a Nigerian psychopath in an alien land with no familiar faces or features, I remember how it felt to be brutally injured in my first experience of northern harmattan. Injury during harmattan is the most painful but then there is the other one which has kept up with me till this day – the emotional scars are more like sores that keep tearing itself apart, banishing the superficial cicatrix and oozing crimson sorrow that nowadays taste like ferrous delight.

READ: Young man treks from Zaria to Abuja to show support for Atiku

Ah well, I hope he saved for his funeral because I don’t think anyone would want to bury that man, the only man that has successfully pissed everyone off in the world.

I am however glad that through his actions my life radically changed and I know now not to treat others badly, I rather be sincere than treacherous, I rather say I don’t like a person to their face than hurt them from behind the curtains.

Through my travails and childhood trauma I want to thank god all mighty donkey-ass for not showing up, if my childhood was sweet, perhaps I’d never have reason to question faith and beliefs and love and marriage and having biological children.

I don’t want marriage, don’t want children, and I want to save for my own funeral which would be a Muslim funeral – wrap me up in white cloth as black would be too spooky, throw the cadaver in a shallow grave not 6 feet but 3, plant N350 mango seedling there so I know at least I was useful one last time to the wild birds of the forest and occasionally a firm branch for a stray person to hang from.

I also want to give away any money I make professionally to charity that would help increase literacy in young girls so they have the power to tell their own stories.

I may have my own opinion of my father, it doesn’t mean others shouldn’t have a different opinion of the man but I strongly believe he is the only person that would die to exorbitant jubilee and champagne pops.

READ: Lady accused of beating Taxify driver speaks; says he was the one who attacked her

Happy fatherless day to me in advance. 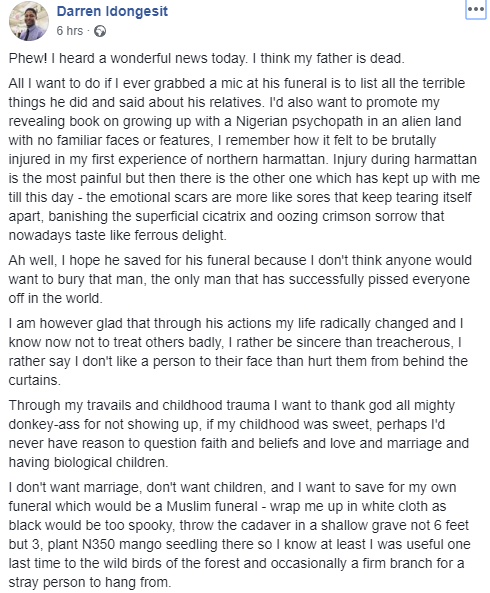 You may also like this; Nigerian woman commits suicide in Ghana over defaulted loans caused by her sealed shop by Ghanaians