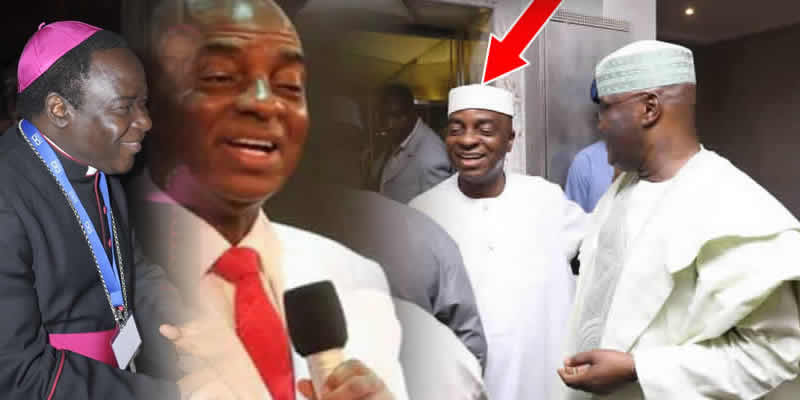 The visit, Oyedepo and Kukah, say should not be viewed as politically-inclined, but one made to broker peace between the former President and his erstwhile deputy Atiku Abubakar.

To many, the mission of notable clerics – Catholic Bishop of Sokoto Diocese Mathew Hassan Kukah and the Presiding Pastor of Living Faith Church (Winners Chapel) David Oyedepo – to the Hilltop mansion of former President Olusegun Obasanjo in Abeokuta, Ogun State, was to endorse Peoples Democratic Party (PDP) presidential candidate Atiku Abubakar. But, the clerics say their mission was to reconcile the former President with his erstwhile deputy.

They spoke through different media.

Kukah, who explained the resistance he put up to decline being dragged into what he called a forest of politics, stated his position in a statement.

The fiery cleric said that he could not have endorsed any particular candidate since he has his friends spread across the political parties.

He, however, admitted that the criticisms that trailed the group photographs, showing him with Obasanjo, Atiku, Oyedepo and Sheikh Gumi among others, were expected, especially at a time that the former vice president had just clinched the presidential ticket of his party.

In his own defence during the Sunday service in Ota, Bishop Oyedepo said he has no membership card of any political party.

Oyedepo said he is after a peaceful country.

The presence of the duo on a day Obasanjo said he had forgiven Atiku and rated him above President Muhammadu Buhari has continued to draw flaks from different quarters.