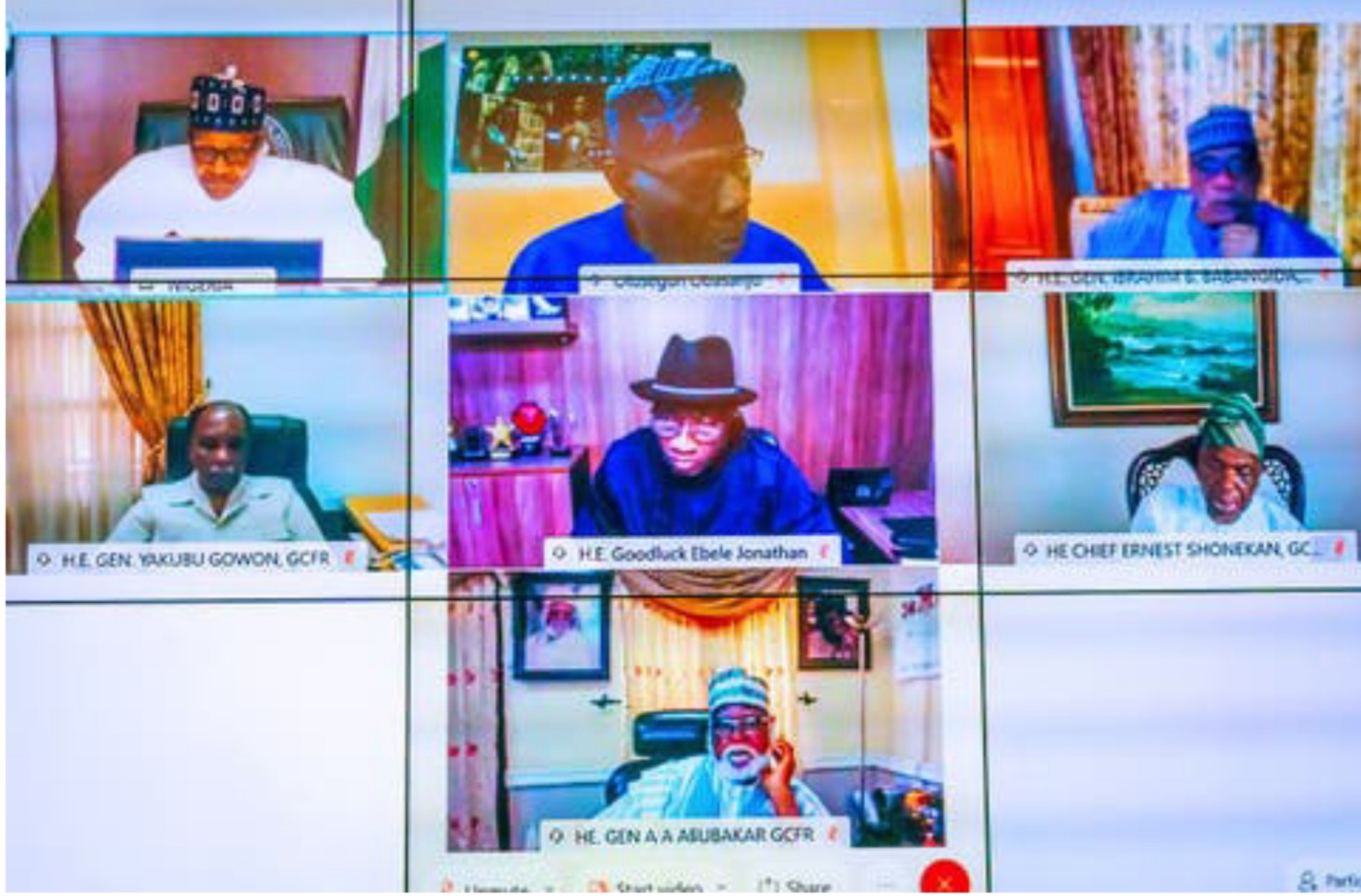 EndSARS: Details of Buhari’s meeting with Obasanjo, Jonathan, others emerge

President Muhammadu Buhari has described as unfortunate the way and manner the initial genuine and well-intended protest of youths in parts of the country against the Special Anti-Robbery Squad (SARS) was hijacked and misdirected.

A statement by Mr Femi Adesina, the Special Adviser to the President on Media and Publicity, said Buhari stated this in a virtual meeting with the former Nigerian leaders, in Abuja on Friday.

The president reiterated that the government would not fold its arms and allow miscreants and criminals continue to perpetrate acts of hooliganism in the country.

Buhari recounted the initial concessions made by his administration on the demands of youths protesting against the excesses of some members of the SARS.

He recalled that the youths had demanded that the squad be disbanded, and further articulated the additional demands, including: ”The immediate release of all arrested protesters. ”Justice for deceased victims of police brutality and appropriate compensation for their families. ”Setting up an independent body to oversee the investigation and prosecution of all reports of Police misconduct within 10 days. ”Psychological evaluation and re-training of all disbanded SARS officers before they can be re-deployed; and increase in Police salary.”

The President declared: ”We accepted all the demands and proceeded immediately to scrap SARS and started the process of addressing the other demands.

”Unfortunately, the protesters refused to call off the protest and engage the government to address their grievances. Instead, they became emboldened and gradually turned violent.” Buhari expressed concern that in the mayhem that ensued, many lives had been lost, a number of public and private properties completely destroyed or vandalized.

While reiterating his pledge to Nigerians from the nationwide broadcast Thursday, the president reaffirmed: ”We will continue to improve good governance through our democratic process including through sustained engagement. ”We shall also continue to ensure that liberty and freedom, as well as the fundamental rights of all citizens are protected. “Here, I want to also reaffirm our commitment to preserving the unity of this country.”

The president thanked the former Heads of State for attending the meeting and their invaluable comments, observations and advice, adding that ”Nigerians expect nothing less from responsible statesmen.” The statement said each of the former leaders commended President Buhari for steps taken so far to restore calm and order to the country.

They also applauded the presidential broadcast of Thursday as detailed and soothing to the country.