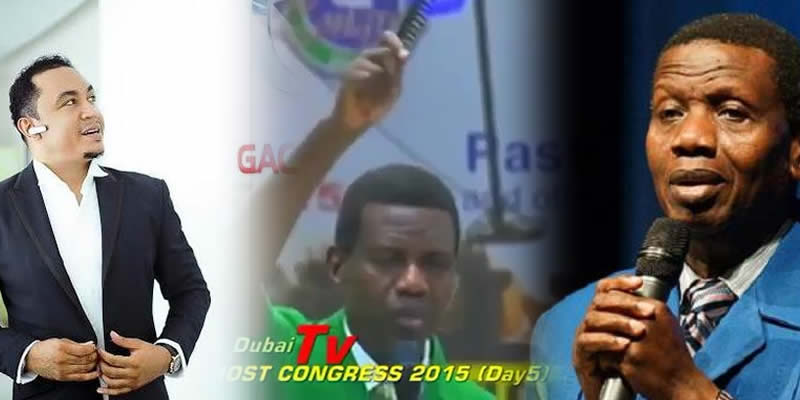 Controversial media personality, Daddy Freeze has trampled on a certain spiritual practice of a Nigerian church. In a recent post, Freeze shared a clip of Pastor Adeboye of Redeemed Christian Church of God (RCCG) doing a special prayer for his congregation. Free the Sheeple Movement leader, Freeze accused the pastor of practicing sorcery

It’s almost as if media personality, Daddy Freeze never tires on attacking Nigerian pastors for their mode of practice. In a recent post, the Free the Sheeple Movement leader shared a clip of Pastor Adeboye praying on a comb for his congregation. Freeze opined that the spiritual practice is sorcery.

Sorcery is the use of magic, a type of magic in which spirits, especially evil ones, are used to make things happen. In the video Pastor Adeboye who is the general overseer of Redeemed Christian Church of God can be seen directing his members to lift up a comb, on which he prayed and instructed they have it on them at all times as it will open financial doors for them.

Daddy Freeze opined that such practice is nothing but sorcery and concluded that Pastor Adeboye, who heads many churches scattered in several countries of the world with millions of devoted members, needs Jesus.

COVID-19: Pastor Adeboye states position on use of face masks

First he asked his congregation to pray to a rod he lifted up, now this comb?😳 – Isn’t this sorcery? Or how do you explain this? Using a comb when you need a visa?😳 Singapore is 5 years younger than Nigeria, yet they don’t need combs for visas because their passport is the strongest in the world. When are we even going to get sense in this country? – In my opinion, Adeboye needs Jesus.

This is a fresh attack from the norm. Before now, Freeze majorly attacked the idea of tithe and offering in churches, where he has severally revealed that the members are just being duped by pastors.

His stance against tithe has made even more popular, with many Nigerians agreeing with him and some others saying he is wrong and should mind his business as tithing as helped them in many ways.

Meanwhile, recently, Daddy Freeze revealed that the Christianity practiced today is more than 99% lies in an online argument with Nathaniel Bassey