Grandmother ties little boy to a tree, feeds him like an animal

A nurse has rescued a four-year-old boy who was tied to a tree for about thirty-six months and fed like an animal by his grandmother.

The community health nurse, who does not want her name mentioned, discovered the hidden horror last week at Balansa-Sanwaasa, a community in the Builsa North District, Ghana during a house-to-house measles-rubella vaccination campaign.

According to reports, every morning, before the old woman left for the farm or the market, she tied the little boy with a rope to a mango tree surrounded by shrubs and kept a plate of food by his side. Naked all the time and always at the mercy of the weather, the malnourished boy had no one to play with under the tree except the leaves and the insects that fell from the treetop. 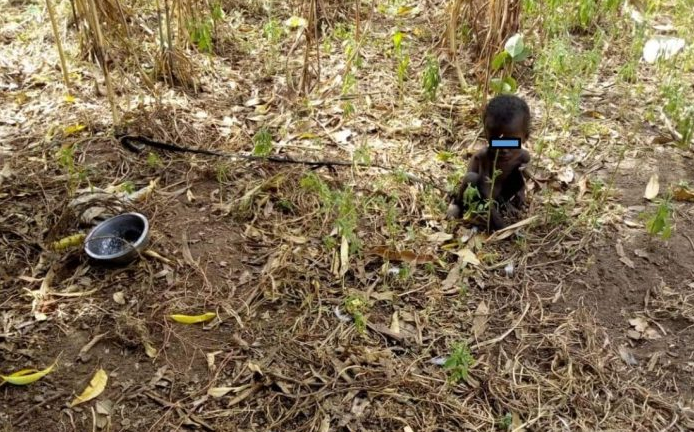 Throughout the years he ought to have spent at a nursery school, he was in exclusive bondage. There he learned on his own how to scribble with his dehydrated fingers— not on paper or slate but on the soil within the area to which the black cord, which was always around his leg, restricted him.

The facts gathered by Starr News are that the boy’s mother was taken ill and died months after the boy was born. His father, too, disappeared even before his mother’s low-profile funeral was performed. Looking at the unfortunate circumstances that greeted the boy’s arrival into the world, the grandmother drew a rigid conclusion that the boy was a ‘chichiruk’—  the name for a ‘spirit child’ in the locally spoken Buli dialect. 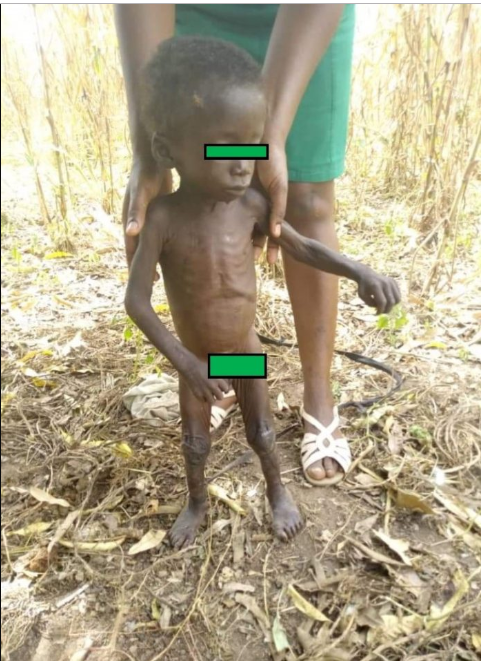 Those circumstances formed the basis of the horrifying treatment she dealt out to the boy. And she resisted every attempt by an outsider to liberate the boy from her shackles until the nurse encountered the boy and threatened a police arrest if she did not release the child at once.

“The grandmother believed it was the boy that killed the mother,” said Derrick Abakisi, a nurse and staff of Sandema-based Radio Builsa. “Besides, she was saying that she would not take care of somebody’s child only for the parents to come and take him away later. She also said the boy liked roaming and she always had a lot of work to do; so, the only way to prevent him from roaming was to tie him under a mango tree.”

At the time of the rescue, a prolonged hunger and a severe malnutrition already had hauled the boy to the edge of a shallow grave.

He looks so emaciated an x-ray machine is not needed to see some of his bones. He appears more or less like a mobile x-ray image or a famished orphan salvaged from a war-stricken third-world country.

The rescue was not just bold. It was also timely. And a team, led by the nurse who secured his freedom, took him to the Sandema Hospital where a number of nurses feverishly contributed cash to have him registered as quickly as possible with the National Health Insurance Scheme (NHIS) for the needed intensive care.

He is still at the children’s ward, receiving care and support from sympathisers who still cannot fathom why a grandmother should blame and torture a grandson for losing his mother way before he was weaned from her breasts.

Starr News learns the police arrested the grandmother but released her within hours because she had a “deaf and dumb” husband and a number of other mouths to feed at home. The Department of Social Welfare has been drawn into the matter— to see how the rescued poor young blood can find a lasting solace— but an unenthused public is both skeptical and critical of the agency, saying the ‘financially malnourished’ department itself needs urgent rescue from the brink of irrelevance.