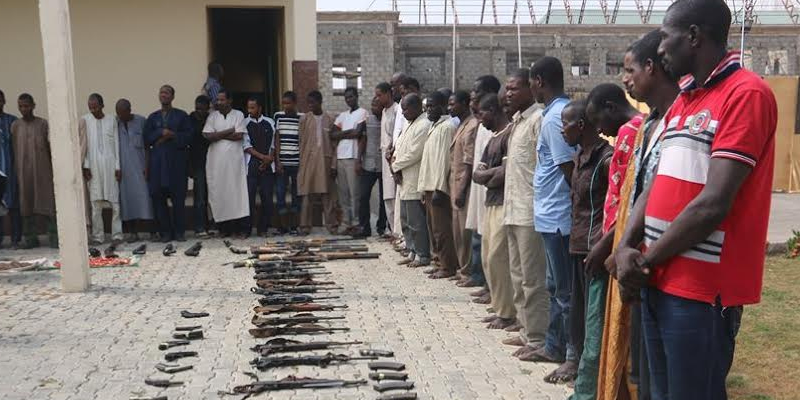 The Police have arrested 93 suspects in connection to the crisis in some parts of Kaduna State.

The suspects arrested, according to the Police were actively responsible for the mayhem that took place in the State.

The Police also disclosed that some suspects involved in the abduction and murder of a traditional ruler, Agom Adara, Mr. Maiwada Raphael Galadima have been arrested.

The Force Spokesman, Ag. DCP Jimoh Moshood disclosed this in Abuja on Monday when he paraded 18 suspects for kidnapping, armed robbery and car snatching.

Moshood said: “So far, we have arrested 93 suspects for being actively responsible for the crisis in Kasuwar Magani in Kaduna South and for other crisis that occurred in other Local government areas within Kaduna State.

“43 of the suspects are being prosecuted as we speak, while 50 are currently in Police custody and investigation is ongoing to know the level of their involvement in the activity.

“The 93 suspects are from different divides and from across borders.”

Moshood also said that the IGP has directed that no stone be left unturned in ensuring that the perpetrators and sponsors of the mayhem are brought to book.

He also assured residents and travelers of adequate security within and outside Kaduna State.

According to him: “The AIG in charge of Zone 7, Taiwo Lakanu is still on ground to supervise the security architecture and we will ensure that permanent peace is sustained.

“Normalcy has been restored and the period of curfew has been relaxed. Residents and travelers are assured of adequate security.”

On whether those who killed the Agom Adara were part of the 93 arrested, he said: “We are deep into investigation of that matter and some suspects have been arrested but I won’t tell you the details yet.

“We want to ensure that anybody who has hand in the killing of the traditional ruler for whatsoever reason are arrested and prosecuted appropriately.”