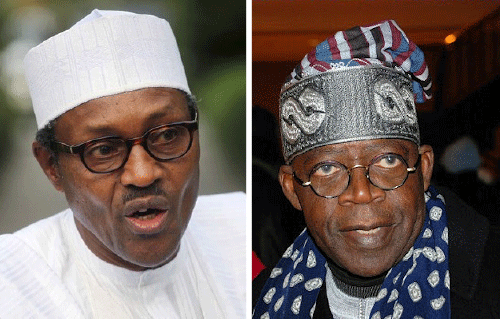 2019: Bola Tinbu Reacts To The Allegation Of Working With Atiku To Defeat Buhari

Tinubu expressed his commitment to the re-election ambition of the APC candidate, President Muhammadu Buhari in next year’s general elections.

In a recent interview, a member of the PDP Board of Trustees, Abba Gana and former FCT Minister, had said Tinubu would work for Atiku because of his long-standing relationship with the former Vice President.

However, Tinubu pointed out that he remains firm behind Buhari.

The former Governor of Lagos State said this through his Media Adviser, Tunde Rahman.

Part of the statement by Rahman reads, “His Excellency Asiwaju Bola Tinubu indicated long ago where he stood on the matter of the 2019 election.

“He has continued to say he remains firmly behind that patriot, President Muhammadu Buhari, in his mission to rebuild the country from the ruins of the PDP years.

READ ALSO: 500 Inter-Faith Clerics Gather In Abuja To Pray For Re-election Of Buhari In  2019

“Only two days ago, he restated this position while speaking with correspondents at the State House in Abuja.

“He said the PDP could hold their meetings anywhere they liked and that Nigerians know who means well for them and is trustworthy.

“Where the former FCT Minister, Abba Gana got his conviction that Asiwaju Tinubu would do otherwise is left only to himself.

“Yes, His Excellency Asiwaju has had a relationship with former Vice President, His Excellency Alhaji Atiku Abubakar, just like he has had with many of other leaders in his political journey.

“But this is about Nigeria, the well-being of the country and of Nigerians. On this score, he has made his pick.”