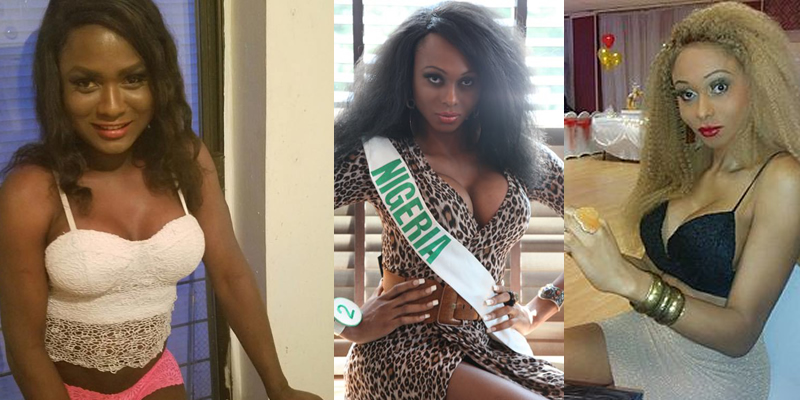 In this article, withinnigeria will be talking about popular transgender in Nigeria. However, before we proceed, we would like to our readers to know what the term infers.

What / Who is a transgender?

Transgender is a term used to describe people who may act, feel, think, or look different from the sex they were assigned at birth.

Following the recent trend and folly involving transgenders worldwide, Withinnigeria looks inwards and compiles a list of Known Nigerian Transgenders.
Amongst them are Ms Sahara, Dapo Adaralegbe and Candy La Mandy.
Also on this list is Nigerian Born But US Based woman who transformed to a man, Rizi Xavier Timane
Below is the profile we have on them.

Nigerian Transgender to compete in a beauty pageant in Ghana with…

The first Nigeria transgender man, Oche Clifford who is now Miss. Sahhara, who was born a male before becoming a model and singer.
She spoke of how happier she is that her dream of becoming a woman was achieved., Crying tears of Joy when she saw her transformation.

She has been known to stir the hornet with offensive speeches about how she supposedly hates God who created her.
The 28 year old Miss Sahara contestant was born a man, Living in Abuja for several years before moving to the UK about 7 years ago where she’s now living as a woman.
She’s now a beauty queen, having participated in a few pageants.
She (He) was 1st runner up at the 2011 Miss International Queen pageant.

Now known as Stephanie Rose, Dapo transformed from being a dark skinned male into a light skinned female through plastic surgery.

In the photos she released after the transformation, the former OAU law student looked every inch like a woman.

Though not much is known of Ms. Mandy La Candy, news and pictures of the man turned woman has been making the rounds on social media, with the notification that she is a popular Nigerian transgender based in Canada.
She shares her pictures where she calls herself amazing.

He used to be a woman. Born in Lagos Nigeria. Now living in the US as Rizi Xavier Timane, a man.
In an interview with, he reflects on his journey to living his truth, and the burden that comes with doing it in a country (US) that doesn’t value ‘Black men’.

Here what he has to say;
I was born in Lagos, Nigeria, and I was assigned the female gender at birth. Both of these facts amounted to one thing: I had no power, no respect, and no privilege, nor would I have much of any of these throughout my life. Add in that I came from a less than wealthy family and was, for all intents and purposes, a lesbian, and I became a truly invisible human being; when I wasn’t being ridiculed or abused, I basically did not exist.

Transgender people, who identify as the opposite gender to the one they were born with, should no longer be considered mentally ill, according to a new UN categorisation.

Princess Shyngle shades Michael Essien’s wife, calls her ‘Dumbest Wife Of The Year’ for reportedly moving out of her matrimonal home