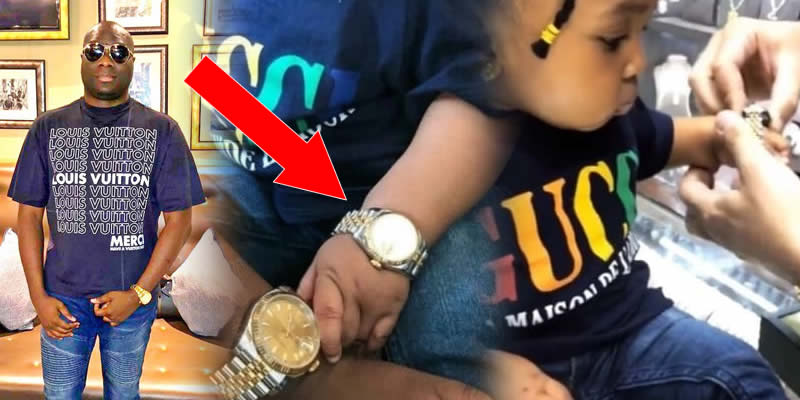 Nigerian socialite, Ismaila Mustapha who is popularly known as Mompha, has set a high bar for the daddy of year award after he bought his 8-month-old daughter an expensive jewelry as gift.

The loving dad, who owns a Bureau De Change, bought his 8-month-old baby girl an expensive Rolex wristwatch. Mompha shared a video of him trying the wristwatch on for his daughter at a store in Dubai.

In the video, the 8-month-girl identified simply as Hanan, seemed unbothered as her dad tried on the wristwatch for her.

Mompha revealed that he had been waiting for the wristwatch to be delivered so his girl could have her first Rolex.

VIDEO: Kachi physically assaulted me while I was pregnant – Ultimate…

In another photo, the Bureau De Change boss showed off his two children as they rocked their Rolex watches.

Meanwhile, We had earlier reported that Mompha had thrown shade at people who claim he is not a billionaire by sharing photos of documents received from the Federal Inland Revenue Service, showing that he made N14 billion in 2017 alone. You may also like;Germany-based Nigerian man banished from Edo state for attacking Oba of Benin on Facebook (Video)