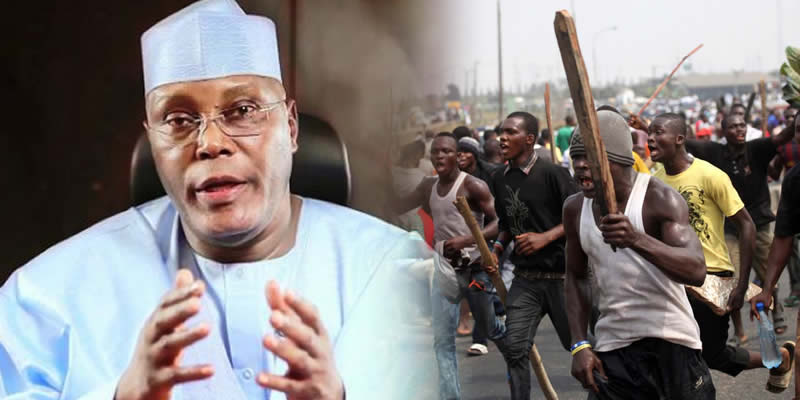 Suspected thugs on Monday chased some aggrieved supporters of the PDP Presidential candidate Atiku Abubakar who had gathered at a hotel in the Wuse 2 area of Abuja to address a news conference.

The thugs who were alleged to have come from the Atiku Campaign Office chased away members of the aggrieved Atiku Support Group and took away the banner of the groups while trying to stop them from briefing the Press.

However, they later told newsmen that they were not happy that the Atiku Presidential Campaign organization refers to them as mere volunteers.

Chairman of the Group, Osaratin Godspower said they called the press conference to intimate the world with the happenings in the Atiku Campaign Office, adding that the era that some persons would work and some persons would eat had gone.

He said: “Let it be on record that it is disparaging and the highest level of deprecatory language of such officials to disdainfully refer to Atiku support groups, who have worked for him tirelessly; who have showed him unparalleled support and solidarity; who purchased the PDP Presidential aspiration form for him; who have risked their lives traversing through our accident pruned roads from Yola through Abuja to Port Harcourt; who have defied the plot of PDP cabals and drummed support for Atiku across the length and breadth of Nigeria until he graciously defeated twelve other presidential aspirants and now the so called officials in APCO have the effrontery to refer to us as mere volunteers.

“This disparaging language used to address these men and women of proven integrity has the tendency of defecting negatively, the effective mobilization of voters for PDP towards the 2019 general elections. This unguided language is uncalled for as it can water down the zeal and moral of the teaming supporters of Atiku.

“All we want is to be recognized; we have worked and we must be recognized. There should be a meeting/interactive session with Atiku Abubakar himself to address the aforementioned short comings; that a letter of recognition is given to all support groups.

“That the Atiku aggrieved support groups are interested into Atiku Campaign Organization and we must be saddled with responsibility to function; that an independent office should be created to accommodate all the support groups; and those necessary incentives should be accorded to all the support groups that over time have been neglected.” You may also like; ‘Go and hug Transformer’, Actress Shan George tells those criticising her for supporting Atiku, Peter Obi