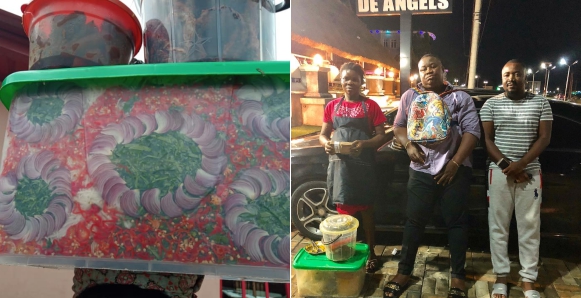 The woman, who is heavily pregnant, was discovered by a Facebook user in Owerri. Chinwerenmeri Joy said she was captivated by the design on the abacha seller’s container but was shocked when the woman came closer and she discovered it wasn’t a design on the container but the creative way the woman had arranged the vegetables for her abacha also known as African salad.

ubana took to his Instagram page to share how he finally found the woman, offered her a job, gave her cash and an apartment in the heart of Owerri, which is the capital of Imo state. He also said the woman made 100k cash on sales of Abacha, due to her popularity.

“According to Cubana she was offered a job and also gift her 100k for her business.I Finally Met The Creative Pregnant ABACHA Woman, She Has Five Kids N 1 Coming Thru, She Hails From Ebonyi

State But Hustles In Our Great Imo

“Her ABACHA is Dope, Gave Her A Reasonable Offer To Work Under My Wife’s Platform (De Angels Bar N Grill) With An Apartment In The Heart Of Owerri