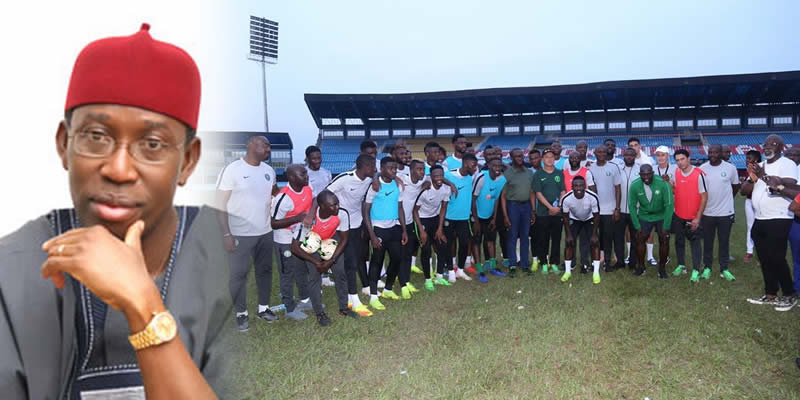 Governor Ifeanyi Okowa of Delta State has reportedly promised to reward the Super Eagles stars with $25,000 for each goal scored against the Bafana Bafana of South Africa in Saturday’s 2019 Africa Cup of Nations qualifying clash.

According to Complete Sports Nigeria, Okowa made the promise when he addressed the team after their first training session on Tuesday evening at the Stephen Keshi Stadium, Asaba.

Okowa was pictured at the Super Eagles’ training base alongside the president of the Nigeria Football Federation, Amaju Pelvin Pinnick and other top officials of the Delta State Sports Council.

In Group E of the 2019 AFCON qualifiers, Nigeria top with 9 points from four matches, while South Africa in second place with 8 points.

Libya and Seychelles are below the Bafana Bafana with 4 and 1 points respectively. You may also like to read; Edit Real Madrid Confirm Appointment of Santiago Solari as New Head Coach until 2021