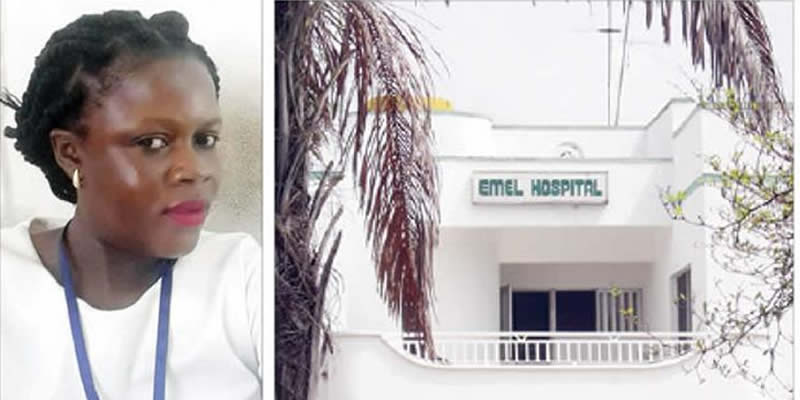 The family of 31-year-old Ifeyinwa Chikezie has been thrown into mourning after she died at the Elem Hospital, Festac Town, Lagos, due to alleged wrong administration of injection.

It was gathered that Ifeyinwa was an asthmatic patient, whose medical record was with the hospital.

It was learnt that on November 10, 2018, the mother of two had gone to the hospital in company with her husband, Emeka Chikezie, because she was not responding well to the use of her inhaler.

The doctor, who attended to her, allegedly administered the injection in a wrong way despite a plea by her husband for another doctor, who knew her medical history.

Ifeyinwa was said to have collapsed and died within 15 minutes of being injected.

Emeka said the death of his wife was as a result of the wrong administration of an injection by the doctor, who was not familiar with her medical history.

He stated, “My wife worked with the National Oil Spill Detection and Response Agency in Surulere and Emel Hospital is her primary hospital. Her Health Maintenance Organisation covers everything. She was asthmatic and she often visited the hospital for treatment. We have been using this hospital for about five years now.

“On Saturday, she called me around 4.30pm that she wasn’t feeling well and she was having an asthmatic attack. I rushed back home, she used her inhaler and she was okay. After a while she started sweating and I suggested that we go to the hospital.

READ: Ogun Native doctor refuses to use lady for money ritual, his reasons will shock you

“We got to the hospital by 5.30pm. The receptionist told the doctor that there was an emergency. One guy came in and claimed to be the doctor alongside a nurse. I was trying to explain to the doctor that my wife’s case was a peculiar one, because I was not familiar with him. I had not seen him before then. I wanted to give him more information about my wife’s medical history and how her treatment could be handled, but he wouldn’t listen.

“I requested a doctor who was familiar with my wife’s medical history to attend to her, but this particular doctor challenged me asking if I am a doctor. I told him it was not about if I am a doctor or not; this had to do with my wife of seven years and how we had been managing her situation.”

Emeka said despite the fact that he explained to the doctor that there was an intravenous injection that was supposed to be gradually administered over a period of about 15 minutes, with the wife taking a deep breath at intervals, the doctor did not listen.

The Imo State indigene added, “My wife was given the injection around 6pm and it was administered wrongly because the doctor injected her all at once. Immediately it was administered, my wife slumped and I had to call out for help. They tried to resuscitate her and after some time, they left me and said they were sorry and couldn’t do anything.

“After a while, I went to meet them demanding a reference letter to another hospital, but they declined, claiming that they didn’t have a letterhead paper. At about 11pm, they gave me a letter to deposit her corpse at the Navy Town Hospital. When I requested for her death certificate, they said they couldn’t issue it during the weekend and I was told to come back on Monday.”

The elder brother to the deceased, Blaise Udunze, said the hospital was trying to cover up its mistake, adding that the family would hold it accountable.

He stated, “I was in Port Harcourt for an official assignment when I was called that my younger sister had died. I took the next flight back to Lagos on Sunday morning. In a hospital that has about five doctors, how would they let someone that did not know her history attend to her?

READ: Anguish in Igbogbo community of Ikorodu in Lagos after discovering 2 children, 1 dog dead inside freezer

“We demand to either see the doctor or they should replay the CCTV footage of what happened. If they are not trying to hide anything; why is it taking so long for them to release the death certificate?”

The medical report seen by our correspondent read in part, “She was immediately attended to by the medical officer on duty.

“On examination, she was in severe respiratory distress with significant reduced air entry and sparse rhonchi bilaterally. An assessment of severe asthma with imminent respiratory failure was made.

“She was immediately commenced on nebulised salbutamol with intranasal oxygen, while she was struggling. Intramuscular hydrocortisone was given, because patient was too restless to be administered with intravenous hydrocortisone.

“However, she was noticed to suddenly collapse and stop breathing within 15 minutes of presentation. Immediately, resuscitative measures were commenced, cardiopulmonary resuscitation, intramuscular adrenaline was also given to no avail.”

When our correspondent visited the hospital, the Clinical Director, Dr Leo Odudo, said Ifeyinwa was brought in a critical condition, adding that it was never a case of wrong administration of injection.

Odudo explained, “We first sympathise with the family for the unfortunate incident and we understand the fact that they are grieving now; this was a woman we had been caring for over the years. Asthma is a very manageable condition but unfortunately, people still die from it based on the circumstances of presentation.

“If an asthmatic patient delays in going to a health care facility, anything can happen. This is a facility where everyone is trained to provide standard health care to our patients and there is a standard procedure for attending to patients; at no point was a wrong medication administered that made her die.

“The way she was brought in on Saturday indicated that she already had the symptom well before she came to the hospital. She had several attacks in the past and we were able to manage them; but in the critical condition like she was brought in, it can tilt either way.

“From our own point of view, she delayed coming to the hospital for reasons best known to the family. And by the time she arrived at the hospital, she was already experiencing respiratory failure. We did all that we needed to do on our part.”

Odudo stated that the hospital had not issued a death certificate because that there was a standard procedure stipulated by the Lagos State Government that autopsy must be conducted for patients who die less than 24 hours after being brought to the hosptial.

You may also like to read; Love potion backfires, turns estranged wife into an insatiable sex addict (Photo)