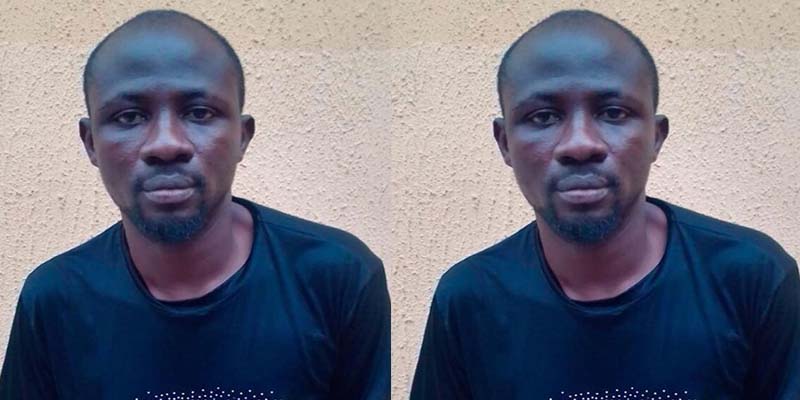 A 38-year-old man, Ibrahim Kazeem, has blamed his wife‘s constant demand for money for his decision to become an armed robber.

According to TheNation, Kazeem, who is the leader of a four-man robbery gang, which specialized in beating up their victims before pushing them out of moving vehicles, was arrested, recently, in Lagos.

The suspect, who claimed to have abandoned his job as a commercial bus driver for robbery, said:

“I am from Okeho town in Kajola Local Government Area, Oyo State, but I was born in Ajegunle, Lagos State.

‘’I am the first child of my parents, who are now late. One of my brothers is a 500 level Industrial Chemistry student in one of the universities in Nigeria. Another one is in secondary school, while two others are learning handiwork here in Lagos; I am the one taking care of them.

‘’My problems started when I married my wife. She gave me children, but she did not obey me. Instead, she continued to make more demands that overstretched me. Instead of cutting her coat according to her size, she would tell me to do what real men do, no matter the risk.

‘’There was one soup I told her that I used to do charm, and that on no account must she touch it. When I went to work, she went and destroyed the charm, despite my warning to her that if the soap is destroyed I would die. Having realized that she had no value for my life, coupled with too many demands from her, I sent her away from my house.’’

’This overstretched me because I am still taking care of my children. As a commercial driver, I used to go home everyday with two or three thousand naira after delivery of five thousand naira to the owner of the bus, yet it was not enough to take care of my family.

‘’I was still managing (as a commercial driver) until one of my friends named Tijani and my conductor brought the idea to rob people and make quick money. They called it advanced pickpocket work. It is different from ‘one chance’ because we don’t use force or weapon to collect phones and money from victims.

‘’This is what we do; the conductor and Tijani, would start haggling the fare while the bus is on motion. As the argument becomes heated, members of the gang who posed as passengers would start disposessing passengers of their phones and money.

“On October 30 October, 2018, along Surulere area, we did not know who alerted the Lagos State Police Commissioner, Mr Edgal Imohimi, and he directed the officer in charge of FSARS, Mr Peter Gana, to pursue us.

‘’We were robbing some victims, when the victims raised the alarm that attracted FSARS operatives, hence, they arrested us.’’

‘My childhood friend who forgot me after stardom’, Man calls out Kelechi Iheanacho