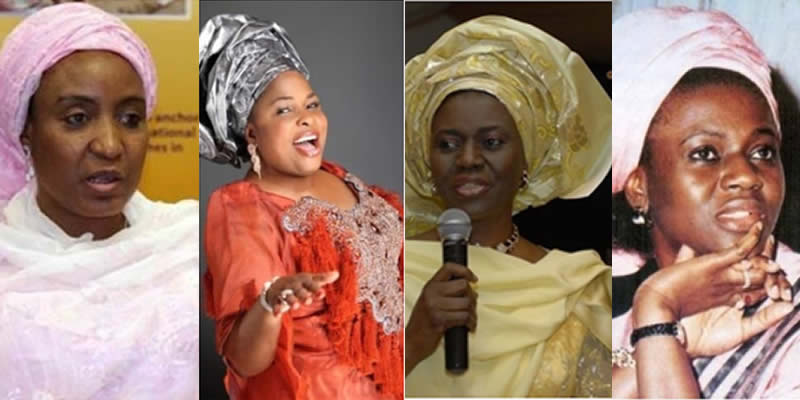 Some say the influence of a woman is so strong that the words from her lips, the gaze from her eyes and her tender mannerisms are enough to start a war or stop one from happening. Human beings are unique creatures but a woman is much more, she’s divine.

Since its independence, Nigeria has had 13 heads of state and presidents, each of this powerful men stepped into the office with strong, beautiful women by their sides. Not only did they impact lives and make their marks while their husbands governed the country, they each stood out with their personalities and style preference.

From expensive labels to jaw-dropping designs, all first ladies had something unique about them but six out of these women remain etched in the hearts of many Nigerians because of how they elegantly managed their position of power and used it to make a difference.

Beauty, intelligence, class, all these six ladies possessed it to the level of their exposure. We presents six most powerful and stylish first ladies since Nigeria’s independence.

Maryam was the wife of General Ibrahim Badamasi Babangida, who was Nigeria‘s head of state from 1985 to 1993. She married him in 1969, shortly after her 21st birthday. Upon her husband’s assumption into the highest office of the land, Maryam carved a niche for herself and created the office of the first lady.

She was known for many things including being an icon of beauty, fashion and style. The super woman was also very classy and always stepped looking modest and stylish.

As first lady, it’s known that she launched many programmes to improve the lives of women with an objective to impact generations.