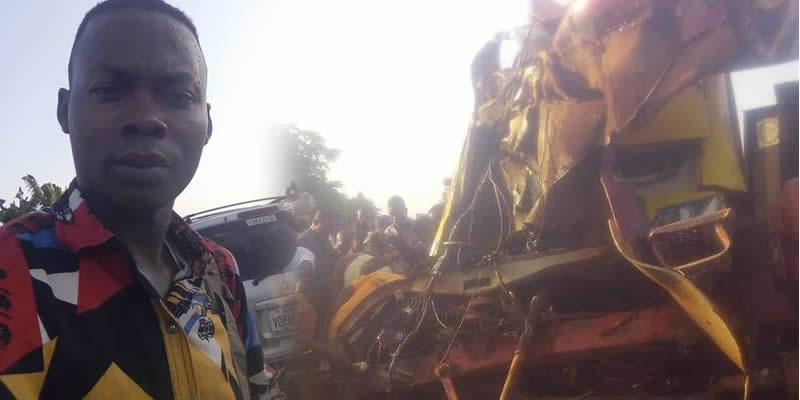 Share on FacebookShare on Twitter
A lucky survivor of a ghastly accident has narrated how he escaped death in an accident caused by alleged bribe-seeking police officers in Nkalagu, Enugu State. 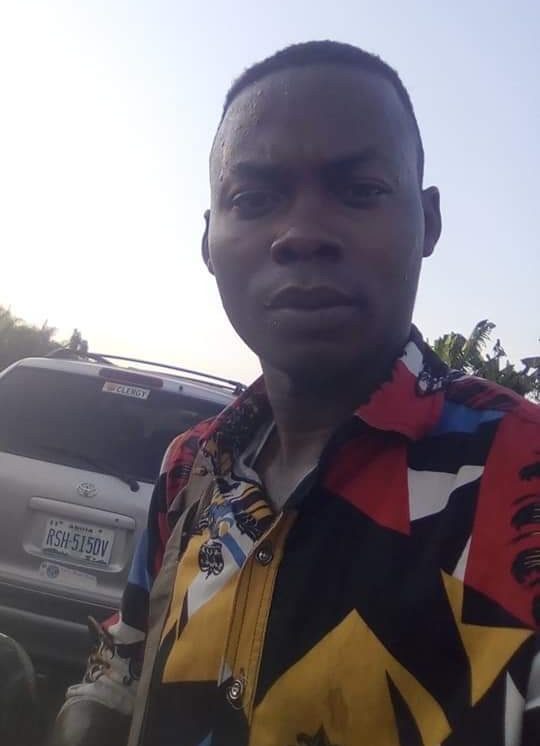 Read post by Mazi Ogbonna, a UNN graduate and linguist:
“I came out from this bus today alive. I was sitting behind the driver. I was the last person to board the vehicle. I was to sit at the front seat amidst the driver and other man sitting on the passenger’s seat but the driver told me my legs are too long I should sit behind. I insisted. But went to ease myself, upon returning, someone else sat there, I sat behind the driver.
Getting to Nkalagu, something happened. My hands are trembling to type right now. But two things I must talk about:
First, Peace driver is not to be blamed but Nigerian Police Force. They caused the accident. They were chasing tipper to collect money, which failed brakes and smashed our vehicle on motion and pushed it to another truck loaded with stones which hit us from front and tumbled. The stone buried a man called Emmanuel right there in front of my poor eyes. Shovels were used to pull stones away to save him, no way.
We were helpless in the bus as everywhere was locked up…I saw blood everywhere. I saw what seemed to be my end. But my prayer every morning has been “let what God allow in my life  happen, I will take everything, anything I see”. I Iooked around and saw people as helpless as I was.

I wanted to help them but I couldn’t help myself. I saw a man trapped by the seatbelt. Those at the front rows are crushed. Driver’s arms are broken. I screamed, out in pain, all windows locked. From the shattered glasses, I peeped out my head….waving for help but it seemed not coming.
People were running away. Fuel was leaking. It could be set ablaze.  My legs were trapped and my head out…I never knew I was on top of a man screaming for help, looking for ways to escape death—untimely death. I could have helped him but my senses weren’t intact. I was to save my life. I was weak and tired. My psychology has ran to the state of imbalance. I flew out of the vehicle…how that happened I can’t tell but I know that my head is safe.
Could it be my head that landed on the  well-tarred road or my leg, or hands? Whichever way, I ran far away leaving my bag which contained serious documents, my international passport….my two phones were lost out in the vehicle. The screaming and cries of the people filled the air. Emmanuel was not found yet. Emmanuel was untimely buried by the stones heaped on him.
Maazi Ogbonnaya ran far away, his phones weren’t there with him…his bag too.
But in all, I have just a little bruise on my leg. Policemen who caused the accident turned to smokes and disappeared.  A good Samaritan drove me to Enugu.
Second:   Thank you Jehovah for saving my life. You are always there for me. What might have been the fate of the poor widow who hugged her son this morning with smiles and fade him goodbye? What if…?
For now I can’t talk more but I am alive. Nothing happened to me. No bone is broken. I am cool. That is my picture after the accident. The shattered truck you see here hit us.
READ:  Woman reportedly hires thugs to beat ‘gateman’ foor demanding his unpaid salary in Delta State
A doctor is here to treat me. 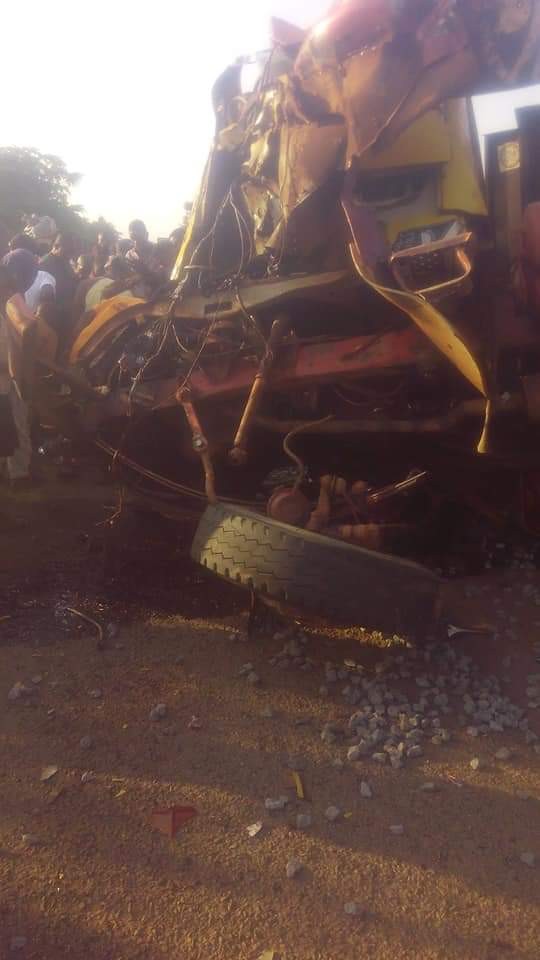 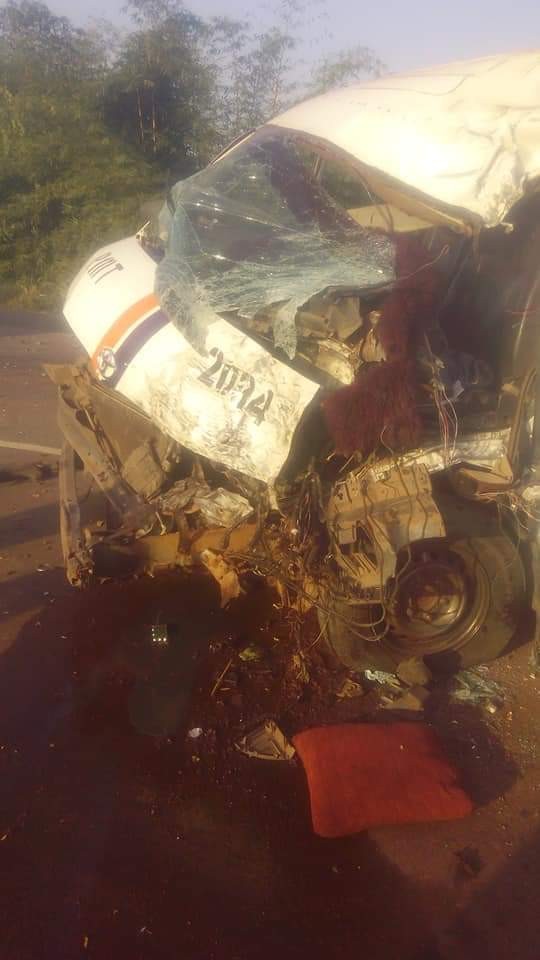 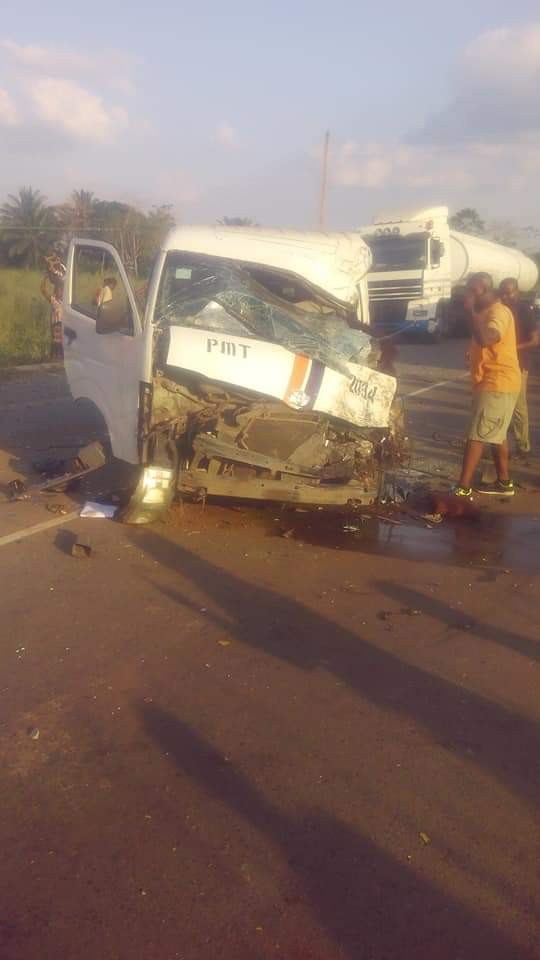