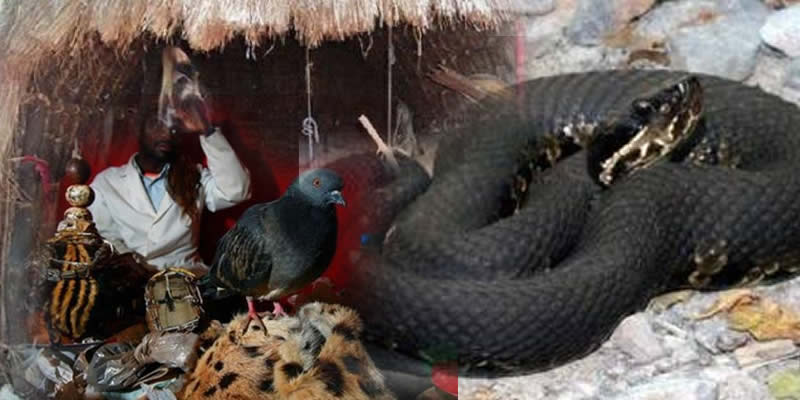 A distraught lady who was given a snake to make her rich by a native doctor, has cried out after the snake reportedly started having sex with her.

The 42-year-old South African lady, Zodwa Ngubane who disclosed that the native doctor gave her a baby snake in a jar six years ago to make her rich, said that the Sangoma (a South African traditional healer) told her that it will only work if she doesn’t have sex with anyone else. The lady who was focused on being rich and didn’t care about the conditions the native doctor gave her, said at night she started feeling as if someone was performing oral sex on her and she loved it.

The lady who revealed that the snake no longer fits into the jar she was given, said;

I don’t want my punani licked. I want cash.

The snake must go!I don’t want this snake anymore. I want to be rescued from it. I heard that people got rich using snakes. I wanted to try my luck.

I was broke and single. I needed money. The sangoma said it would only work if I didn’t have sex with anyone. I thought that was strange but I didn’t care, I just wanted money.

I enjoyed every moment. So the snake was for my sexual pleasure. I was having fun but the snake wasn’t going to buy me a house! I knew I would have to get rid of the snake so I could get a boyfriend and find another way to make money.

Zodwa who told Daily Sun she went back to the sangoma but he was nowhere to be found, added that she has given up on the money but she really wants the snake to stop.

You may also like to read; 5 facts you have to face if you want to be rich

Xenophobia: Air Peace CEO breaks down in tears on seeing Nigerian returnees from…