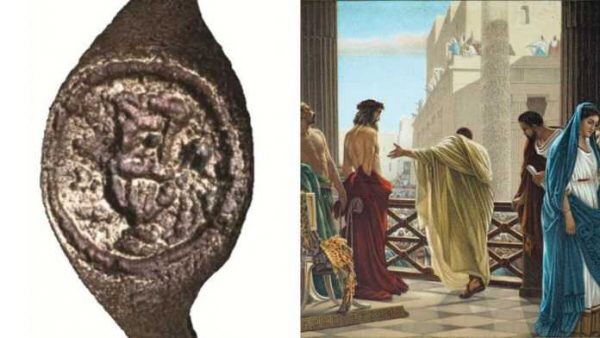 Pontius Pilate’s ring has been found in Israel, and it was gathered that the bronze ring was discovered 50 years ago during excavations at the Herodion fortress in the Judean desert.

Experts in Israel suggest that it might be a Pontius Pilate’s ring, the Roman governor who oversaw the trial and crucifixion of Jesus Christ. Professor Gideon Foerster of Hebrew University of Jerusalem first uncovered the ring in a dig, and it handed over to a team researchers currently working Herodion, led by Roi Porat, also of  Hebrew University. Intense cleaning and a specialist camera owned by the Israel Antiquities Authority have revealed the ring’s secrets.

A wine vessel and the Greek inscription “Pilatus” can be clearly seen on the ring, according to Haaretz. It was also gathered that scientists from the Israel Antiquities Authority cleaned and photographed the ring, which showed a wine vessel called a “krater” after intense cleaning.

As prefect of the Roman province of Judea, it is quite possible that the ring belonged to the infamous Pontius Pilate. Experts also speculate that it may have been used by a member of Pilate’s court to sign documents in the prefect’s name.

I don’t know of any other Pilatus from the period and the ring shows he was a person of stature and wealth.

While Roi Porat, director of the dig at Herodium said “the personal connection just cries out”, others suggested that the ring might have been used by a member of Pilate’s staff to stamp documents.

“Simple all-metal rings were primarily the property of soldiers, Herodian and Roman officials, and middle-income folk of all trades and occupations.

It is therefore unlikely that Pontius Pilatus, the powerful and rich prefect of Judaea, would have worn a thin, all copper-alloy sealing ring” the researchers wrote.

At the site of an ancient city on the West Bank, archaeologists are also hunting for evidence of the tabernacle that once housed the Ark of the Covenant. Some experts also believe they have found the lost Roman city of Julias, formerly the village of Bethsaida, which was the home of Jesus’ apostles Peter, Andrew and Philip.