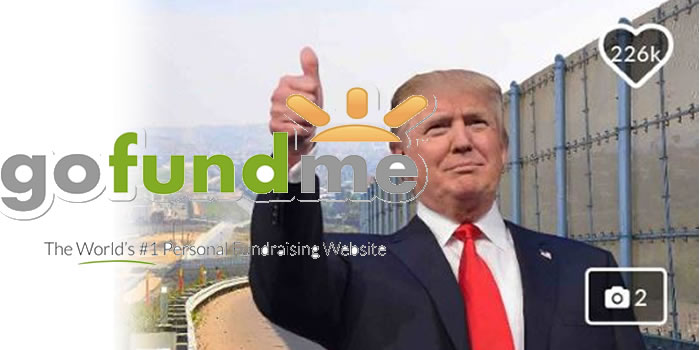 The GoFundMe campaign dedicated to Americans funding the Texas border wall has been shut down after funders failed to reach the $1 billion goal set.

Brian Kolfage, a triple-amputee Air Force veteran, raised more than $20 million on the crowd-funding platform to build a wall along the U.S.-Mexico border. At the onset of the campaign, Kolfage said he would only collect the funds if the campaign hit its goal of $1 billion about one-fifth of what President Trump has been demanding from Congress to build it.

“However, that did not happen. This means all donors will receive a refund,” Whithorne said. The refund announcement came a day after BuzzFeed News reported that Kolfage pocketed money in a previous GoFundMe campaign intended to help other wounded soldiers.

Kolfage raised $16,246 for a veteran mentorship program, but BuzzFeed News reports that after collecting the funds, he didn’t use the money as promised: none of the partners he claimed to have worked with including Walter Reed, Brooke Army Medical Center and Landstuhl Regional Medical Center in Germany have any records that Kolfage worked with their patients or donated money, according to representatives at the centers that BuzzFeed News spoke to.

In an update to donors Friday, Kolfage did not say missing the goal was the main reason for the refund. Instead, he pointed to government inefficiencies and the fact that the federal government “won’t be able to accept our donations anytime soon.”