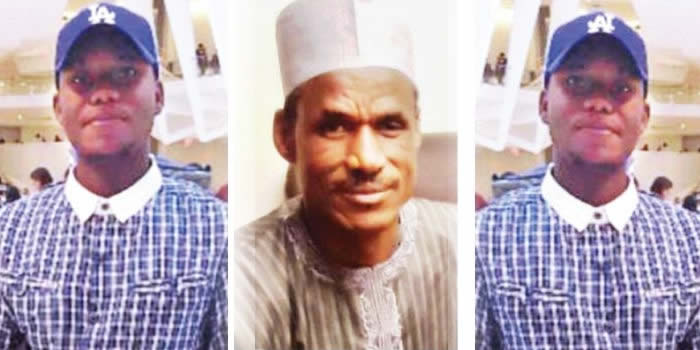 A 22-year-old ma,  Huzaifa Hussaini Usman has been charged by the police in Abuja for allegedly killing his own father.

The deceased, Alhaji Hussaini Usman, a businessman and contractor, was allegedly strangled to death in his residence at Abdulkareem Adisa Estate, Apo, Abuja on October 28. Police investigators have reportedly concluded after over a month of investigation that the deceased’s last son, Huzaifa Hussaini Usman, was the main suspect in the murder.

According to initial reports circulated on October 28, armed robbers invaded the house of the deceased and strangled him.

According to a report by Daily Trust, a neighbour of the deceased was said to have explained that after the morning prayers, the people present at the mosque reportedly heard some noises coming from the deceased’s house and put a call across to him but that he didn’t answer.

They were said to have finally gotten access to the house after calling the wife of the deceased.

“When they entered, they saw the dead body of Alhaji in the sitting room. Those that entered said they were suspicious because they knocked on the door severally and it took a long while before it was eventually opened.

Huzaifa was said to have told people that after he discovered his father had been killed and the assailants had left, he dragged the corpse to the sitting room from the compound and he went to call his mother before they went to the mosque to call for assistance.

READ: Photo of Young man who killed, buried pregnant girlfriend in his apartment in River State

He added that “on Huzaifa’s body, there were scratches that looked like finger scratches. So we were suspicious and asked how he came about the scratches since he earlier said the assailants asked him to face the wall.”

The source further revealed that suspicion grew when they discovered that Huzaifa did not accompany the corpse to the National Mosque despite being the only man in the house since his elder brother, Aliyu Hussain, was in Kano the night of the incident.

It was gathered that the request of the police to conduct an autopsy on the corpse was rebuffed by his family members who insisted he should be buried immediately according to Islamic rites.

About two weeks after the incident, Huzaifa was invited by the police and has been in detention since then.

A source familiar with the police investigation said Huzaifa admitted that he gave money to someone to kill one Ismail but not his father.

However, spokesman of the FCT Police Command, DSP Anjuguri Manzah, while confirming the arrest, added that investigation had been concluded and a charge has been filed against the son as the principal suspect before the High Court of the FCT.

You may also like to read; What really happened between men and Police, Small Doctor explains arrest