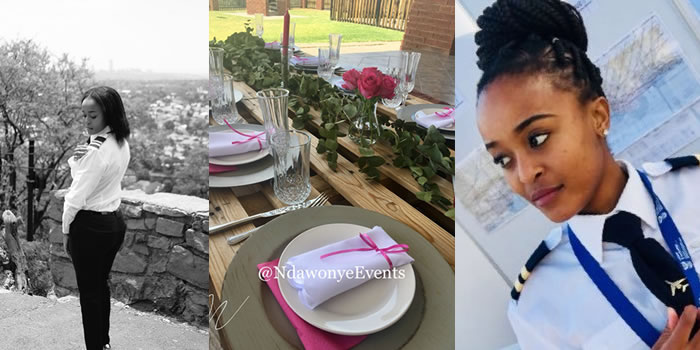 A 22-year-old lady is successfully juggling two high-flying careers as a pilot and an events planner.

It was also gathered that she obtained her private pilot licence in 2017. Her pilot dream was sparked on careers day during her matriculation year.

We’re here for a reason. I believe a bit of the reason is to throw little torches out to lead people through the dark pic.twitter.com/VtrYxgRf0t

Ngobe took a gap year to raise funds for her commercial pilot licence. It was during this period that she founded her company.

Dedicated Mom Sells Biscuits So That Daughter Can Become Pilot

Ndawonye, which means ‘together,’ provides décor, furniture hire, catering, and bar services. Zandi also has a visual arts background, which boosts her business.

It hasn’t been smooth sailing, however a few of the challenges Ngobe has faced include lack of staff (because her company is still young) and mentorship.

Luckily, her supportive family steps in when she gets orders for larger events. She studies and practices for her commercial pilot licence during the day and focuses on the business in the evenings.

I am not afraid of storms for I am learning to pilot my own plane ?? pic.twitter.com/c0prongViW

Ngobe urged young people to overcome their fear of entrepreneurship:

Jump in the pool and you will find your feet along the way; you will learn how to swim. We live in fear that we are going to fail. Ultimately, you need failure to learn and to become better. Let us not be afraid to fail because failure does lead to success.

You may also like to  read;  Charly Boy remarries after 40 years (photos)

Video: Mother breaks down in tears as her 4-year-old daughter narrates…