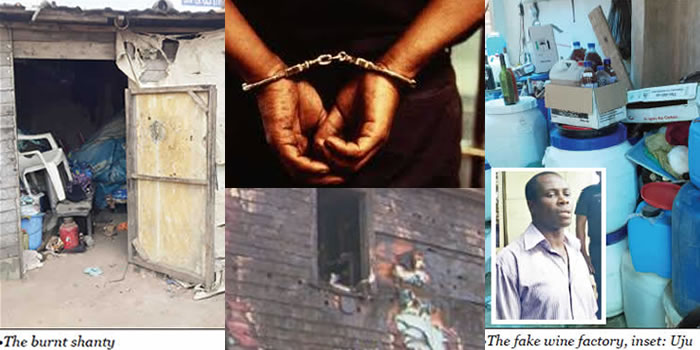 One dies as man sets family of four ablaze in Lagos

Operatives of the Lagos State Police Command have arrested one Shola Adewunmi for allegedly setting ablaze the shanty that housed a petty trader, Bose Enitan, and her three children, Esther (17), Ayo (9) and Nifemi (5), in the Power Line area of Alagbado.

Enitan’s neighbour, who identified himself only as Anthony, said the fire, which started late on Tuesday, killed one of Enitan’s children.

He said, “The fire started in the night when Enitan and her children were asleep. It was easy for us to break into the house and when we entered, the entire room was engulfed in smoke. We managed to rescue the woman and two of her children from the fire. But Nifemi died, while Ayo, Esther and their mother sustained burns.”

The Lagos State Commissioner of Police, Edgal Imohimi, who led a team of journalists to the scene of the fire incident on Wednesday, said Adewunmi and Enitan had an altercation, which allegedly made the former to decide to burn down the shanty housing the latter and her children with the intent to kill the occupants.

Imohimi said, “I consider this case a callous one about man’s inhumanity to man. Fortunately, the suspect has been arrested. This is the dwelling place of the woman and three of her children; they were sleeping and suddenly, there was a fire outbreak. They sustained major degree burns and were rushed to the Gbagada General Hospital.

“Fortunately, the DPO and his team were able to recover a phone and that phone was traced to one Shola Adewunmi, who previously had a serious altercation with the woman. From the evidence we have so far, he purposely set fire on the shanty with the intent of burning the woman and her three children alive.

He has been arrested and I have ordered that he should be taken to the State Criminal Investigation and Intelligence Department, where he will be properly interrogated.”

Imohimi also led journalists to an alleged fake wine factory owned by one Uju Ughanze, 48, in the Oke-Odo area of Lagos.

Imohimi said the factory had produced over 4,000 bottles of adultrated wine of different brands, adding that samples of products recovered from the factory would be sent to the National Agency for Food and Drug Administration and Control for laboratory analyses.

He stated, “On Tuesday, December 18, 2018, around 2pm, the command received credible information that there exists a factory in an uncompleted one-storey building at the Aboru area of Oke-Odo, Lagos, where assorted wine and alcoholic beverages were being produced.

“Based on the information, I directed the Area Commander, Area P, Alagbado, to mobilise to the scene, search and seal off the factory. When the team got to the scene, a search warrant was executed, which enabled the team members to search and recover the following items: 4,000 bottles of already produced, packed and labelled adulterated wine of different brands; 1,000 empty bottles; drums of different sizes; and various chemicals and reagents used as raw materials; and other tools used in the production of fake wine/beverages.”

Imohimi, who said Uju, had neither the requisite qualification nor licence to embark on such a venture, appealed to Lagosians to be wary of the consumables they buy, especially during the Yuletide, as adulterators might have flooded the market with sub-standard products.

Uju, however, said the products were not fake, adding that he was awaiting the approval of NAFDAC to commence their commercial production.

You may also like to read; Suspect ‘ll marry corpse of my daughter, says Father of girl slain and buried inside apartment in Port Harcourt