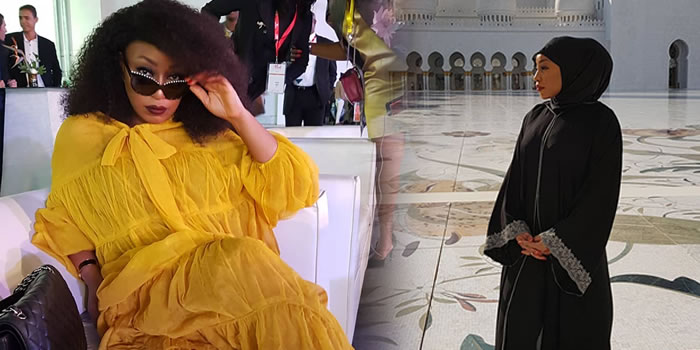 Nollywood actress Rita Dominic is one of Nigeria’s favourite screen diva. This is not only because of the fact that she is a veteran in the profession who has dazzled many with her absorbing roles. It is also because of her beautiful look and sense of style. As it appears, the diva aced her fashion game during the occasion of her vacation to Abu Dhabi.

In an earlier post, Rita had announced that her Christmas was going to start much more early than most people. Hence, rather than wait to put up her tree during Christmas eve, she set hers up on November 29.

But even more, the diva decided to take an early vacation to Abu Dhabi. During this vacation, she has brought her great sense of fashion, style and elegance with her. The entrepreneur was spotted wearing a dotting black “jallabiya” with a matching hijab.

The actress looked totally stunning in the attire which she wore during her visit to a mosque in Abu Dhabi. She particularly toured the magnificent structure whose name is Sheik Zayed Grand Mosque.

Rita who does not like a dull moment at all took the liberty of taking lovely photos of herself that complemented her fashionable attire. In the pictures which was shared on her Instagram, she beamed with happiness thereby showing that she was having so much fun.

Group praises Buhari, Service Chiefs for return of peace to…

Even more, Rita posted a picture of her big sister who was most likely with her in the city of gold. Judging by the photo, her sibling was excited and happy to be with the actress. Then, there were the beautiful scenes which the screen diva showed off to her fans.

In several of the shots, Rita gave a glimpse into the magnificent, elegant landscape and architecture that characterised Abu Dhabi. Beyond this, the actress and successful entrepreneur also gave her fans a peep into the exquisite dishes and food that were prepared in the exotic location.

With everything she has to show, it is obvious that Rita is living her best life and starting off Christmas on a very good note. The elegant fashion sense of the actress has been displayed on so many occasions. Recently, the actress was spotted looking chic and amazing in a colourful monostrap dress.

You may also like to read; Nigerian celebrities look stunning at Heaven On My Mind movie premiere