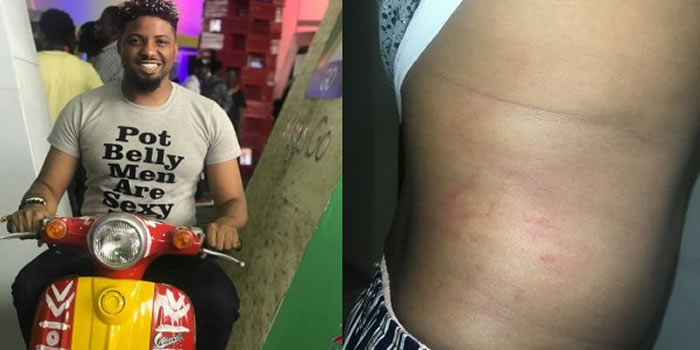 Media personality Ejino Omo-Abijawara Valentine, took to Facebook to narrate how he fell victim to the widely reported police brutality, an incident that left him peeing blood.

According to Media personality Ejino Omo-Abijawara Valentine, the incident occurred while on his way to Calabar carnival.

On my way to CALABAR on Friday the 21st Of December, myself, Kaydex, Quepeller and a few other artist and friends, were in a convoy of 3 cars en-route CALABAR for the festival and to shoot a couple of music videos. On approaching Niger bridge we lost track of one of the vehicles. A few minutes later we got a call from them that they had been detained by the police, for traffic violation. We then made a turn and returned to Asaba, when we arrived the station after beating the Niger bridge traffic we were told the DPO had gone home and nothing could be done to release our colleagues until the DPO arrived the next day. We had to cut short our journey and proceeded to lodge in a hotel in Asaba to return to the station the next day.

– [ ] On the morning of Saturday the 22nd Myself, KAYDEX and his manager returned to the station to find out why our colleagues were illegally detained with no criminal charges, while the rest of the travel party were to remain at the hotel until we were set to leave for CALABAR. As we arrived the station, we were pounced upon by the the DPO of C Division Asaba, CSP. EYO and his officers. Who began beating us and calling us criminals, murderers, ritualist, yahoo boys, and then he said and I quote “we will waste you today”.

VIDEO: How Terry Apala was harassed, stripped by police in Lagos

I was beaten up and detained, no questions asked, our phones were ceased and we were thrown into a cell. In a desperate attempt to save my life and to let people know my situation as Csp EYO had threatened to waste me and nothing would happen. I sent a broadcast message to various recipients explaining what had just transpired right before my phone was ceased. Several attempts were made to reach CSP EYO who either denied us being detained spoke rudely to the lawyers or would refuse to speak with them at all. I was detained for 9 hours unlawfully, my other companions had been there since 3pm of Friday the 21st, and any attempt to ask why we would be detained with no charge warranted more beating. After several correspondences between QUEpeller who was still waiting for us at the hotel and the lawyers we had earlier contacted a lawyer in Asaba was sent to the station, CsP EYO finally released us. He told the lawyer we were detained because we look like yahoo boys and because our security escorts didn’t have the correct covering papers.

– [ ] At the moment I can not hear unless you speak directly into my right ear a damage done as a result of the numerous slaps I was dealt by CsP EYO. I have a broken leg from the kicking and trampling by Csp EYO, I had a seizure too as a result of several blows to the back of the head. This and a host of other ungodly threats were dealt to me today.

– [ ] We met with other people he had also detained illegally, some for several days including a seating councillor who told us that, that is how he has been running the station. Detaining people, beating and intimidating them and then collecting money from them before he can release them.

– [ ] As we left the station I reflected on what had transpired, police brutality, intimidation and extortion still exist, we were lucky to have been saved today but what about countless others who have no one to intervene.

The concluding story . . .please read, I may never hear properly again, and to add I’ve being peeing blood!

You may also like to read; Ondo Commissioner of Police accused of being friends with yahoo boys