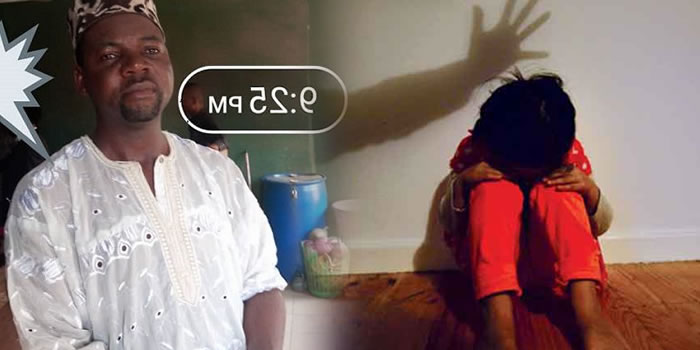 A 43-year-old Islamic studies teacher Abdulsalam Salaudeen has been arrested by the police for defiling a five-year-old girl.

Salaudeen, who lives 16, Awoyemi Street on Igando Road, Ikotun Lagos, was recorded on video while engaging in the act.

The suspected pedophile was allegedly engaged to teach the girl Islamic studies.

A Good Samaritan last Friday took the video evidence to the headquarters of the Lagos State Police Command.

After watching the heart-rending video, Commissioner of Police (CP) Imohimi Edgal, directed the command’s undercover operatives attached to the State Intelligence Bureau to immediately arrest the culprit and hand him over to the Gender Section for detailed investigation.

The operatives went in search of Salaudeen and arrested him near a mosque in Igando, a suburb of Lagos.

A statement by police spokesman Chike Oti, a Chief Superintendent (CSP), said Salaudeen was taken to the Gender Unit, where the Officer-in-Charge, Abimbola Williams, an Assistant Superintendent of Police (ASP) confronted him with the video of him defiling the child by penetrating her anus and private parts.

“On seeing himself captured like an actor in a movie, the suspect broke down in tears and owned up to the crime,” Oti said.

The case, he added, will be charged to court as soon as the investigation is concluded.

Oti said: “The CP, while commending the courageous act of the good Nigerian, warned parents and guardians to keep constant watch over their children and wards.

“Nobody should be trusted. Be friends with your children and let them be free to share things with you.

“Do not cover up any crime, no matter who is involved. Raise the alarm on child molesters in your neighbourhood so they can face the law and other nursing such thoughts can be deterred.”

You may also like to read; Attempt to help Nigerian man on a path to kill self fails as he walks with head after getting ‘high’