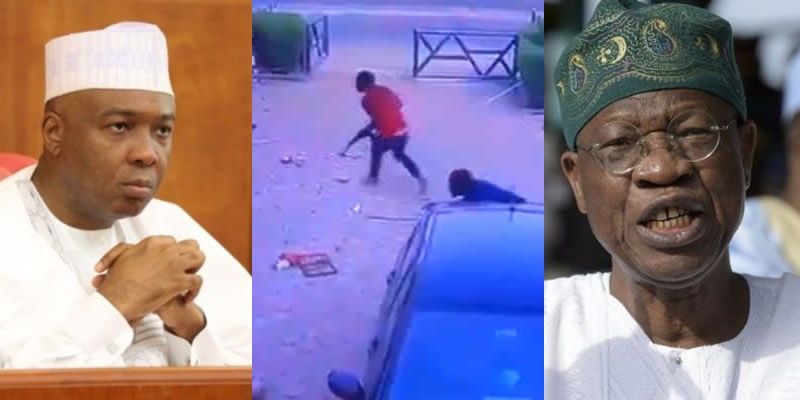 The Special Adviser (Media and Publicity) to Senate President, Yusuph Olaniyonu, on Thursday stated that if there is any doctored version of the Christmas Day radio interview by his boss, Dr. Abubakar Bukola Saraki, the Minister of Information, Mr. Lai Mohammed, who presented it should be asked where he got it from.

Accusing Mohammed as being the author of such a doctored recording, Olaniyonu in a statement in Abuja, stated that the radio stations were simply instructed to do a repeat broadcast of the interview following the requests by stakeholders at various meetings held by the Senate President around the state.

“Nobody produced another tape or instructed anybody to edit any part of the tape and nothing like that was done. That is why the same instruction was passed to all the stations, including Harmony FM, which is under the supervision of Mr. Lai Mohammed and the Sobi FM owned by an APC gubernatorial aspirant. The Sobi FM did not air the repeat broadcast because they said they had another Programme scheduled for that Sunday morning.

“On my way to Pategi town in Kwara North Senatorial District that Sunday morning, I listened to the repeat broadcast on the car stereo and the area concerning the Offa case was clearly there. If there was any plan to doctor or edit the tape, would we do such a thing with Mr. Mohammed’s Harmony FM or propose that to Sobi FM whose position is well known to us? So, if Mohammed suddenly created and produced a recording of the interview different from what was repeated by the four radio stations on December 30, 2018, then he should be asked how and where he got it”, Olaniyonu stated.

He added that it was good that Mohammed at least admitted that Dr. Saraki donated N10 million to people in Offa but that the money was meant for the traders that lost goods in the inferno that razed the market in the town and not for the victims of the robbery incident.

“I remember as a member of the Senate President’s Delegation to the Olofa of Offa’s palace to commiserate with the people on the sad incident of the robbery that it was during that visit that Mrs. McCarthy, the secretary of the Offa Development Union (ODU) raised the issue of the earlier incident on the market fire incident and Dr. Saraki promised that N10m would be made available the following day.

“The question people should ask the Minister is: How much has he ever donated to provide succour for the people of Offa for whatever purpose? He is only trying to draw political capital from the sad occurrences that happened to his own people. We are not unmindful of the fact that he continued to talk about the Offa incident as a way of playing cheap politics on the misfortune that befell some people. We urge him to move on to talking about what development projects he has brought to Offa as a member of the Federal Executive Council representing Kwara State”, he added.

The aide to the Senate President noted that while the information Minister continues to grand-stand over a dubious and Pyrrhic victory recorded by his party in a bye- election in which he led security agencies to inflict violence on his people, the results had only produced an illegitimate legislator who is largely shunned and viewed with scorn by members of his community.

“We are not surprised that a ‘visiting’ politician like Mr. Mohammed found it strange that Dr. Saraki held meetings with canvassers and stakeholders across the local government areas during the Christmas holiday. As a grassroots mobilizer, this is what he has always done since he first contested in an election in 2003. Well, a Lagos based, ‘seasonal’ politician like the minister would not know. Now, he should know that the electioneering campaign in Kwara State is always done on ward to ward basis and not by staying in Abuja or the state capital. As a matter of fact, the campaign is yet to begin.

“At this point, Mr. Mohammed should tell the public which faction of APC he belongs to in Kwara State because the last time we checked, he is a member of the Bolarinwa faction which has been declared illegal and all its activities and candidates nullified by the Court. He should let us know if he has now joined the Balogun-Fulani faction or as he is fond of doing, he will simply stay in Lagos and be a poll observer in the coming elections. As he struggles to answer the above questions, let it be known that this will be my last word on this issue”, Olaniyonu stated.