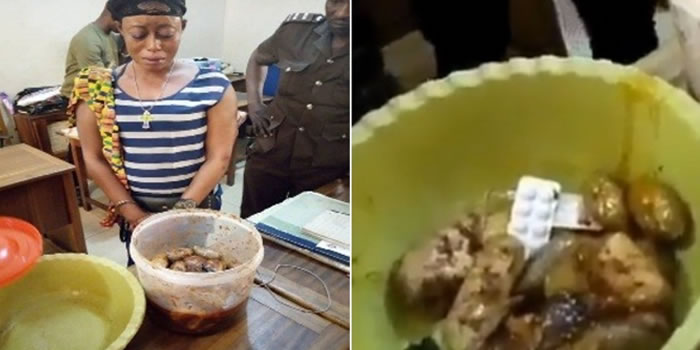 A woman has been arrested while trying to deliver food to her boyfriend in jail.  The woman was caught with hard substances which she tried to conceal in a bowl of meat stew. It was gathered that the woman tried to sneak in Tramadol and weed to boyfriend who was jailed for abduction

33-year-old Ghanaian woman identified as Gifty Addo has been arrested at the Kumasi Central Prison in Ghana. The woman had reportedly been arrested for trying to smuggle hard substances into the prison.

The woman who had gone to the prison under the guise of delivering food to her jailed boyfriend was caught with Tramadol and weed.

According to Ghana Web, Addo’s boyfriend identified as Yaw Odum had allegedly been selling drugs to inmates in the prison with the help of his girlfriend.

Love is a really strange thing, when some people are getting arrested just for this thing we call love,  Newsmen also reported the story of a woman who says she has not felt her husband’s touch since they tied the knot. The woman claimed her husband of 5 years has not slept with her since their wedding night.