Notorious Nigerian Kidnapper who broke out of jail recaptured in Ghana

The police in Ghana have rearrested a Nigerian kidnapper, Samuel Udoetuk-Wills, who broke out of cell and escaped from the custody of the Takoradi Metropolitan Police command on December 30th. 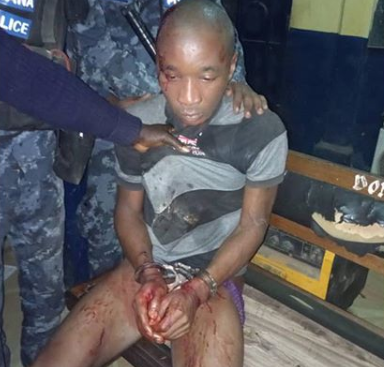 Samuel was first arrested on December 22nd in connection with the alleged kidnapping and disappearance of a number of girls, but mysteriously escaped from cell.

He was recaptured in the wee hours of Friday January 4th by three policemen in an abandoned building in the bush at Kanssawurodu, near Takoradi and has since been transferred to the Police Headquarters in Accra.

Police sources say he was found sleeping deeply in the disused building, however upon his arrest he head-butted one of the policemen in an attempt to escape. He was overpowered and is currently in custody.

You may like to read; Lagos engineer crushes neighbour, dumps corpse in canal and flee