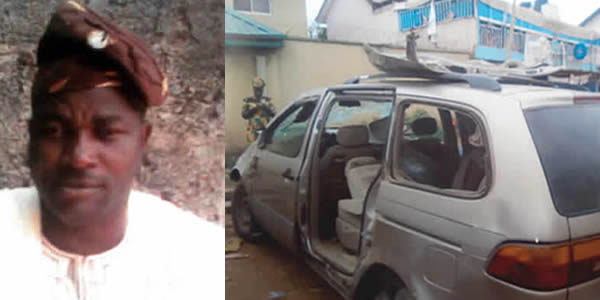 A computer engineer identified simply as Samuel is on the run following the gruesome death of his neighbour, Taiwo Aiyegbusi, in the Alagbado area of Lagos State.

Samuel, while driving home along Ibari Road, Alagbado around 9pm on Sunday, reportedly crushed the father of five, dumped his corpse in a canal and fled the community.

It was learnt that Taiwo, a mechanic in Fagba, a neighbouring community, had visited his church member, who lives a few metres away from the scene of the accident.

The 42-year-old native of Ipere Ekiti, Ekiti State, was trekking back home when Samuel lost control of the car and veered into his path, slamming him on an electric pole.

Our correspondent gathered that Samuel and three friends were returning from a party.

They were said to have taken Taiwo to a private hospital in the neighborhood, from where he was referred to the Ikeja General Hospital. They reportedly dumped his corpse in a canal at Abattoir area after he died on the way to the hospital.

Photos: Tears flow as Nigerian lady who was crushed to death few weeks…

Tragedy as truck crushes father, son to death in Kogi

Samuel reportedly returned to the scene and removed his car. 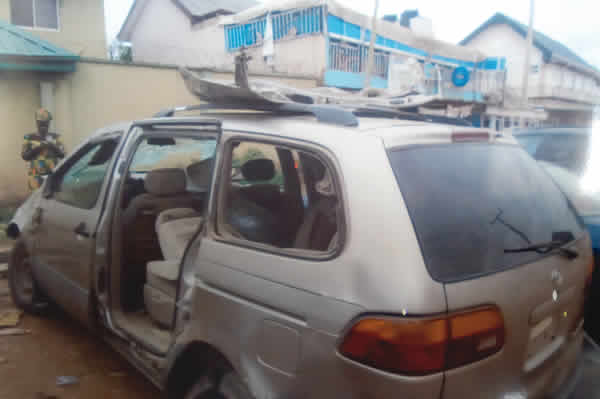 A friend of the deceased, Segun Inuesokan, said landlords around the area kept quiet on the incident until he (Inuesokan) threatened to report them to the police. He added that it was a search party organised to look for Taiwo that found his corpse in the canal.

Inuesokan said, “On Sunday when the incident happened, I was not around. When I came back on Monday morning, somebody called me that Baba Ife (Taiwo) was involved in an accident. I was very shocked. I went to meet the pastor of his church and he confirmed the incident, but said Taiwo’s corpse and his killer had not been found.

“I went to the scene of the accident and met with some landlords. I threatened to report all of them if they failed to expose the killer. The landlords knew Taiwo because he grew up in that area. In the process, a resident confided in me that the car was driven by Samuel. He is a computer engineer in Ikeja.

“While I was making more inquiries from people, I learnt a corpse was dumped at a canal in Abattoir. When we got there, we discovered it was Taiwo’s body. We removed the corpse and took it to the Police station before we deposited it in a mortuary in Ota.

“Samuel and Taiwo grew up and lived in the same place before he (Taiwo) relocated to Malomo Street, Alagbado. Samuel lives on Odutola Estate, Alagbado. I went to his house and asked his wife where he was; she said he was not around.

“When I asked her if she was aware that her husband killed somebody, she broke into tears. I asked his father if his son told him that he killed somebody, he said, ‘yes.’ I asked him what steps he took, but Samuel’s dad didn’t respond to that question. Rather, he said he did not know his son’s whereabouts.”

It was learnt that the suspect’s father was arrested by the police from the Alagbado Police Station after Taiwo’s family reported the incident. He was released on Tuesday with a promise that he would provide Samuel by Friday.

The suspect had yet to be arrested as of the time of filing this report.

A police source disclosed to our correspondent that the victim was not rushed to the hospital immediately after the crash because the landlords insisted on collecting N50,000 from Samuel to replace the electric pole.

The source said, “The man did not die on the spot. Instead of the landlords to assist in rushing him to the hospital, they were requesting N50,000 from the driver to replace the pole. They were negotiating while the victim was unconscious. The driver and his friends later took Taiwo to a private hospital, from where he was referred to the Ikeja General Hospital.

“Instead of heading for the hospital, they went to dump him in a canal at Abattoir and returned to the scene of the accident. The prime suspect (Samuel) told the landlords that the victim was dead and that his corpse was in the hospital. The landlord aided him to tow his car from the scene. He took it to Jankara Market for sale and fled. The car was recovered by the police in front of the market gate.”

The elder brother of the deceased, Sunday Aiyegbusi, lamented that the Divisional Police Station, Alagbado division, was not handling the case properly. He said Samuel’s friends, who were in the car during the crash, were walking around freely without being arrested or invited by the police.

“I suspect something sinister beyond the accident. Why did he (Samuel) throw his corpse away when he knew him? Why did he take the car to Jankara? The police should carry out diligent investigation to get to the root of the matter. We have petitioned the state Commissioner of Police on the case. We want it transferred from the division,” he added.

The church member, whom the deceased visited that day, Abiodun Falaye, said Taiwo left for home around 8.30pm after they had spent about four hours together, adding that the accident scene was five minutes’ trek from his (Falaye’s) house.

He said, “He got to my place around 4pm. He said he needed N200 that he would use to take a bus to his shop on Monday. We chatted till around 8.30pm before he left. I wanted to see him off but I was expecting somebody to call me for a meeting.

READ: Man stabs elder brother to death on eve of their father’s burial in Anambra (Photos)

“Shortly after he left, the person called me. I was going to the venue of the meeting on a motorcycle when I stumbled on the accident. I came down from the motorcycle to assist in rescuing the victim. His face had become dark and I could not recognise him.

“He was being taken to a private hospital in a tricycle when I left the spot. Some eyewitnesses said the driver also hit a woman and that she had been rushed to the hospital. The landlords were discussing how to fix the pole when I left the scene. I didn’t know whether they eventually collected money from the driver. It was the following day I knew that Taiwo was the victim. We found his corpse in the canal.”

Taiwo’s widow, Funmilayo, told us that he was sleeping when she and her children left for shop around 3pm on Sunday, adding that they did not meet him at home when they came back.

Looking pensive, Funmilayo said she became apprehensive around 10pm when she called his line several times, but was not reachable.

“At 6.30am the following day, I called his line and somebody picked the call. The person told me to come to a filling station. On getting there, the person told me that the owner of the phone was involved in an accident, but he did not tell me where he was taken to.

“I saw my husband’s sandals on the road and started crying. I was confused. I looked around for him. We eventually found his corpse in the canal. He was a man who always strove to fend for the family. We did not deserve this loss,” she added tearfully.

Taiwo’s first child, Yomi, who had just finished her secondary school, said she would miss her father sorely. She said she had requested some money from him that day and he promised to give him.

The Lagos State Police Public Relations Officer, CSP Chike Oti, who confirmed the incident, said the command had launched a manhunt for Samuel, noting that anybody found complicit in Taiwo’s death and disposal of his body would be brought to book.