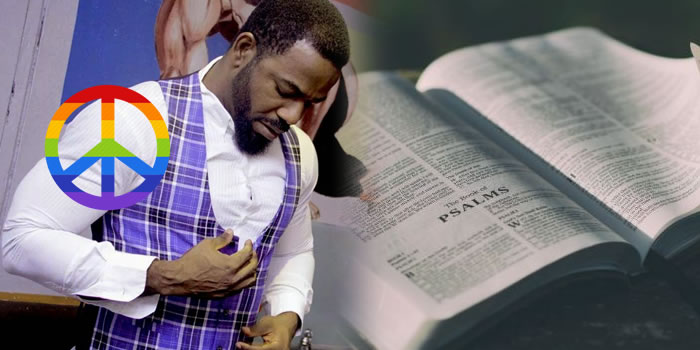 Kenny Badmus has shared an experience he had with a female Uber driver and while doing so, he reflected on his mother’s death, religion, the Bible, and his sexuality.

Kenny, who was a preacher before he came out as gay, said he was the one who converted most of his family members into the Pentecostal movement, including his mother.

But when he became aware that he was gay, he knew he had no future in the church because the Bible was clearly against same sex relationships and he knew there were no two interpretations to certain doctrines in the scriptures.

When my mom passed, I had a request from home that we needed to make donations to her church – a Pentecostal church. In fact, I converted most of my family members into the Pentecostal movement when I was a preacher boy. Serendipitously, Aduke, my mom was one of my many converts. Unfortunately, since I became fully aware of my sexuality, I knew I had no future in the church.  I never wanted to take the liberty to interpret the Bible my own way. As a former Bible school graduate and student, I know there are no two interpretations to certain doctrines in the scriptures.

Twist it or turn it, the Bible is clearly against same sex relationships. The Bible is also clear about the relationships between women and men in the body of Christ. There’s an order and a pattern: the man first, and the woman comes after. In fact, the pronoun ‘HE’ is attributed to the unseen God. In Billy Graham’s own words, “Metaphors used to describe Him in the Bible include: King, Father, Judge, Husband, Master, and the God and Father of our Lord Jesus Chris.” It’s the way the world was when the Bible was written. We can kumbayah around it all Sunday long, the Bible was never written for our private interpretations.

He continued to narrate his experience with the female Uber driver, writing:

So the call came that I needed to send money to mom’s church in her memorial. I was conflicted. I knew how much Aduke loved her church. She was a Sunday School teacher. I also knew how much the church loved her back. As a single mother with so many adversities too numerous to count, the Church was my mom’s happy place. I recalled how I had baptized her so she could speak in tongues. How we both cried for joy when she started to pray in the Holy Ghost. No, we didn’t fake it. You simply open your mouth under the anointing, and the good Lord fills it with unknowable language and twangs. Even though all her problems never went away, my mom found happiness in the clapping of hands and the stomping of feet in the house of the Lord. She had it on a good promise that when she died all her troubles would be over, and that she would walk on the streets of gold. These experiences and promises provided an irreplaceable escape for her. How could one fault that! I can’t. I made up my mind that it was worth it. That it’s ok to send donation to mom’s church. People find happiness in where they find happiness. It’s our duty to protect ourselves from the toxicity of other people’s happinesses. And my hard stance against the church began to soften. (I still find religiosity quite amusing though).

It’s not my thing, but I have come to realize that the church has continued to provide a place for the weary to escape this wicked world for a minute or two. Some find this escape in other spaces, some just can’t escape and are daily confronted with the harsh realities of injustices and inequalities.

Then two days ago, my softening approach to faith and religion was tested in an Uber ride. I knew I was in for a ride when upon entering the car, I noticed that the driver had conspicuously placed a Bible on the designated passenger seat. I shrugged. I used my ass to move the Bible further away from me and pretended all was well. The driver, a beautiful black woman with a roundish face sitting under a long synthetic hair had some air around her. Her eyes ?, as seen from her rear view mirror, planted themselves on my seat as though I had just murdered a person.

Not today, Satan! I disciplined my tongue not to say a word.

“I see that you are not saved,” she slowed the vehicle down as we approached the street ahead.

No, I’m not having this conversation, Lawd! I started to fiddle with my phone hoping for a call to come in.

“Young man, I’m asking you the most important question about your life: have you accepted Jesus into your life as your personal Lord and Savior?” She leaned back as she pedaled on slowly and steadily.

I had a lot to tell her but I remembered Aduke. Perhaps, this evangelism is what gives my Uber driver some form of happiness. Perhaps not. So I held back my fury and simply said to her: how sweet of you to offer me salvation, but no thanks. I do not need saving, and I’d appreciate if you could drive more carefully.

When my Uber app prompted me to rate my driver when I got home, I wanted to give her a star instead of five. I struggled. I came to the middle ground and rated her three stars. The world could use some empathy right now, I thought.

Have a beautiful Sunday and be happy!

‘I shall not die but live’, MC Oluomo debunks death rumors himself as he appreciates friends and family

Comedian beaten for being gay (video)

‘You Can Never Be Wrong In My Eyes’, Nkechi Blessing Reacts To Funke Akindele’s court case

Governor Makinde reveals how he fought and defeated coronavirus within…