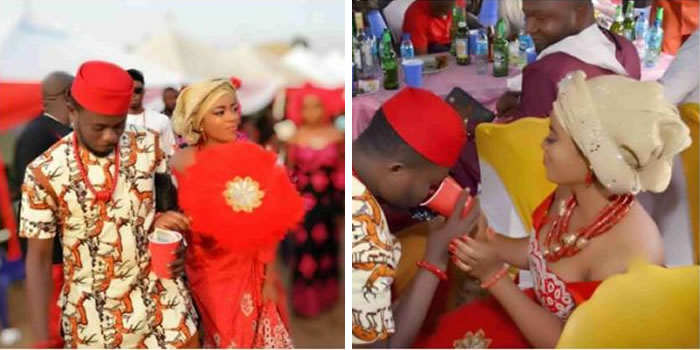 By Aanu Damilare On Jan 14, 2019
Share FacebookTwitterWhatsAppReddItPinterestEmailLinkedin
A Nigerian lady weds man she met 2 months ago as she advised other ladies not to waste their time with boyfriends while neglecting husbands.
The new bride, Aunty-Ugochi Mirabel Eric, posted photos from her traditional wedding and revealed that she and her husband met in November 2018, her price was paid in December 2018, while her traditional wedding held in January 2019.

She wrote:
CHECK THIS ALSO:

If you’re not understanding that relationship of 15 years biko let it go, it mustn’t lead to marriage ( though it works for some people), I too was in that long term relationship before I met him, don’t lose your husband cox of boyfriend. So many people are busy saying“why didn’t you both date?”

And I tell you , prayer is the shortcut, once you’ve prayed and everything confirmed, biko fire down
The person I planned to play is my husband today
Congratulations to us

Nigerian man in Japan reveals why he is not into crime