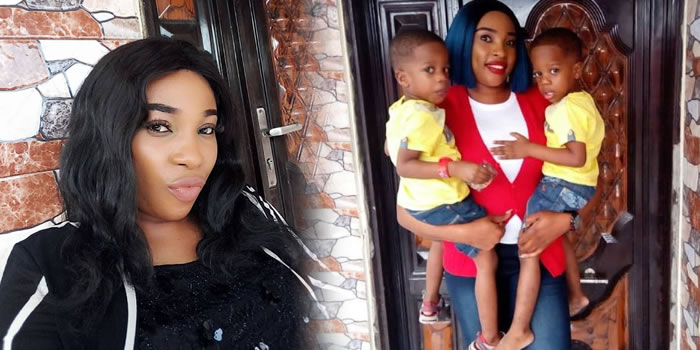 A Nigerian mother‘s post caused a bit of panic on Instagram on Sunday as a great number of people, including celebrities, tried to reach out to her for fear that she might do something rash and irrevocable.

Jane Akwaugo Ikenna, a mother of four, wrote on Instagram:

If I am no more, please reach out to my innocent triplets+1, they are unlucky to arrive in an evil family.

Jane has now replied hours after her post sent people into panic.

Jane, whose husband allegedly abandoned with their four kids so he could be with his side chic who he recently bought a car for, said she is fine now. She then went on to thank everyone who worried about her.

She revealed that her kids haven’t stayed with their father for over a year. She said she sometimes leaves home very early in the morning and returns late at night after her kids have gone to bed so as to avoid having them ask her where their daddy is.

Yesterday, when the kids asked for their daddy, she says she told them that God is their dad.

She also added that finances are a bit tight for them and she escapes from home to avoid her kids asking her to buy things for them.

But she assured those concerned about her welfare that she’s fine now because her dad has stepped in to take care of her.

She, however, warned that some people have created fake bank accounts in her name, asking people to donate towards her and her children.

Someone called my nanny and told her things,she called me and my children were crying,my son asked me if I won’t buy spider Man and bysicle again for him,my daughter mummy we luv yu,I dropped the fone. Thank Yu my people,I have not finish reading msgs cos they are much,thank Yu for saving me.. some pple created fake account? It’s expected,I don’t and have never begged for money on any celebrity post,I dont know juju and juju doesn’t know me,for over a year,my children havent stayed with thier dad but I told them on fone yesterday that GOD is thier dad,i’m a loveable and strong person but sometimes we are human. I drink garri in peace.. you can’t stop whoever wants to help my children,cos if I’m a witch are they also witches? If Yu know me personally,yu know how I leave house and come back late when my children must have slept to avoid mummy buy me this and dat,and where is our daddy? The triplets @toyin_abraham @anitajoseph8those msgs were touching,I will live. @dabbychimere why are Yu crying? I’m still dat strong woman yu hv known #mrsalexandrauzoma anytime I call Yu n say I’m having headache,yu tell me to remember I’m hypertensive and send provisions to my children,tnk yu. My younger sister also called my dad but didn’t tell my mum,I’m currently with my dad now. I promise to be fine,thank you Nigerians and everyother person that sent in msgs,i luv yu all. So many pple I can’t tag them all #uju? I don’t hate so my children deserves to be loved. GOD BLESS us? GOD BLESS yu all?