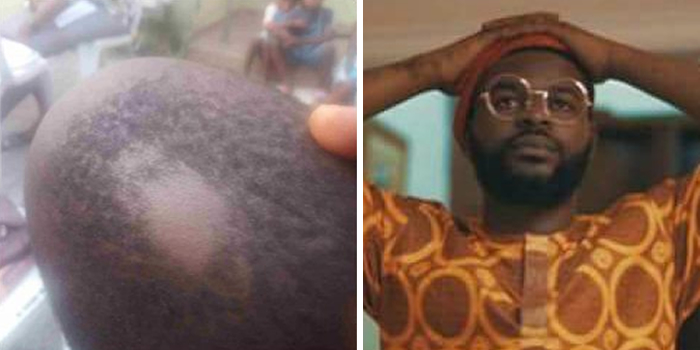 A woman has taken to social media to call out a Lekki school after her son’s hair was shaved off in the school.

She told her story on Instagram and gave details on how shocked she was to see that her sons hair had been shaved off. She says in these days of money ritual, she cannot keep quiet.

And to make the matter more suspicious, the school refunded the child’s school fees as seen in a letter written to the family.

Please read my current situation. I need all the help I can get. I need answers to my questions.

On the 18th of January 2019, after dressing my children up for school, my husband dropped them off.

I usually pick them up at school but I was busy and requested that that the school drop them with the school bus .

I noticed a strange thing on my son’s head immediately and I asked him what happened to his head/hair. He said he was sleeping in the class and one of the students woke him up.

I immediately went to the student’s house(names withheld) and asked what he knew about my son’s shaved head. He responded that he knew nothing about it. Thereafter, I called the owner of the school about what happened and on Sunday, she came to my house that the matter would be investigated.

After waiting and not getting any feedback as promised, I reported the matter to the police station. She was subsequently invited and asked to come with the teacher and class nanny. The DCO of police stated she would go to the school to see things by herself.

She pleaded I should allow my chidren return to school, assuring me that nothing would happened to them. The DCO also asked the little boy that my sons said woke up but the little boy was just crying.

The class teacher was also said to have gone to one of the student’s house and upon enquiry from the school owner, she said the teacher is also carrying out her own investigation. What investigation? When the police is involved already!

During one of these period, my son said his teacher told him to mention the boy that woke him up from sleep as the person that shaved his hair.

I have been in turmoil since this incident happened because nobody could explain why my son’s hair was shaved and who did especially in this season when pants, pads and diapers are being stolen for God knows what purpose.

Attached is the shaved hair, the refunded cheque and the letter from the school.