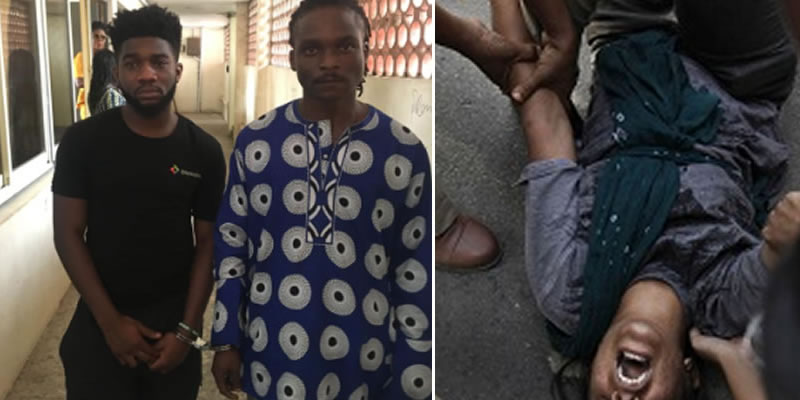 Outrage as Lagos Police is accused of releasing BigBoys, Don-Chima and Razaq who allegedly raped young girl in Lekki

The police have been accused of freeing the two young men, Razaq Oluwaseun Oke and Don Chima George who drugged and raped a 23-year-old woman then filmed it with their phones.

The suspects, Razaq Oluwaseun Oke, 28 (right), and Don-Chima George, 25 (left), whose father owns Dallankester Hotels in Lekki Phase one, took the woman, 23, to a club on Saturday, February 2nd, 2019.

The suspected rapists were arrested after the victim called her brother and he came with police officers. The suspects denied raping the girl but their mobile devices were searched and a video of the men abusing their unconscious victim was seen on their phone.

They were immediately arrested. But according to social media users, the young men have now been released from jail

I honestly cannot believe the audacity of Nigeria and money. So 1) don chima george and ricco were released. Scot free FOR RAPE 2) don chima’s father then got police to arrest the victims brother, sister and friend. As in right now HER BROTHER is in jail. I am FURIOUS

The Domestic & Sexual Violence Response Team have reacted to the allegations that the young men who drugged, raped, and filmed a 23-year-old woman have been freed by the Lagos state police

Twitter users also alleged that Don-Chima’s father got the police to arrest the victim’s brother, sister and friend.

But the DSVRT has said that the allegations are false. They say the suspects are still in custody and will be prosecuted.

Our attention has been drawn to the rumour that the perpetrators of rape of a 23 yr old lady have been released. This is to inform the general public that the suspects are still in custody. The DPP will ensure diligent prosecution of the case. @kingNelo2 @grooveeshakes @TheNamii