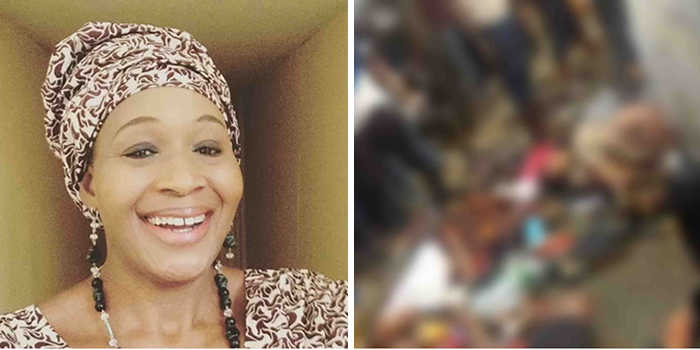 Controversial journalist Kemi Olunloyo, has said she was the one who cursed Rivers people with death because she was framed.

This is following the incident on the death of indigenes of the state in Port-Harcourt after a stampede during an APC rally yesterday.

In a lengthy post, the self acclaimed social media global citizen wrote,

WISHING DEATH UNTO RIVERS STATE PEOPLE!
(Part of my upcoming book)
I once said that Rivers people were going to die for the false case their attorney general bought against me for Ibiyeomie. He died, the prison guard who went to court with me died, lots died in the collapsed building and now APC.

I’m very bitter about that state even more after finding out how police botched my case. Idris’ men quickly withdrew charges after finding out Iyabo Ojo’s PA sent the Journalist the fake 8 page newstip, something they said I wrote. I chatted with the DEVIL (Yes he’s inside the prison) Unleashed curses on Rivers State, prayed for the mayhem they avoided from Abacha to happen one day.

IT’S ALL HAPPENING NOW! I DID NOT PRAY FOR THIS. YOU DON’T PRAY FOR EVIL. YOU WISH AND CURSE FOR EVIL. Iyabo has never apologized for her PA who used me to attempt to Investigate an innocent pastor instead of the real one she was linked to.

To summarize, I take it back. The people of Rivers did not cause my pain. Iyabo Ojo, her PA and the phone did. I am still bitter. The PA is reportedly on the run for stealing from her. May this mayhem I wished for Rivers State END TODAY!

I am Yoruba and curses here are powerful plus I have ESP, ambidextrous and struck twice by lightning in CDN and NG. I have supernatural powers. May God eradicate evil away from Rivers State. The terror they put me thru March 14th 2017 armed with a 14 police convoy will never be your portion.

The fear I went thru that day after 12 hour drive then arrived at SARS in Aluu only to witness inmates shot to death at SARS something called extrajudicial killing which I thought I will be next made me curse up Rivers.

Now I need to unlift the curse. God will see you thru Rivers State. May danger never return over there. When Don Waney was killing people cutting heads off for cultism, I was laughing in the cell. You don’t know what #PTSD is till you experience it. I’m still in recovery. May evil never come ur way. It is not PDP or APC. They don’t care about u. It’s the evil within us. God bless Rivers State, may Nobody die over there during and after the ELECTIONS ever again. #RIP

to those who died in the struggle.
#KemiOlunloyo

“Do not enter Nigeria! Get a good lawyer” – Kemi Olunloyo warns Jaruma

”Tacha got a customized Ciroc drink, not an endorsement deal” –…