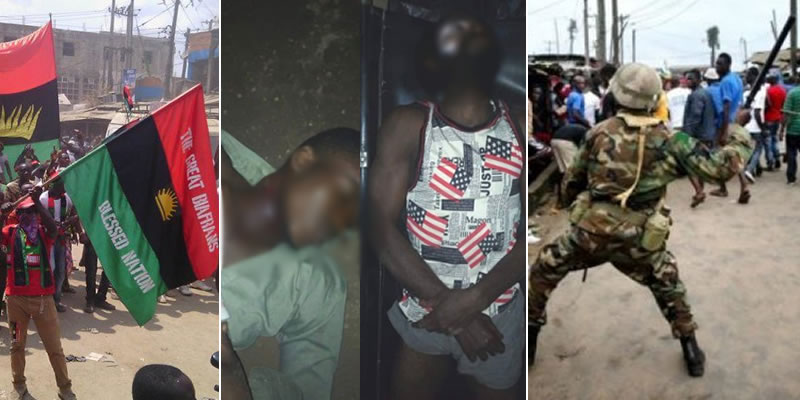 Nigerian Soldiers have killed two of our members in Owerri, IPOB cries out

The Indigenous People of Biafra, IPOB, have accused Nigerian soldiers of shooting two of their members dead in Owerri.

IPOB also expressed anger over alleged killing and abduction of its members in Imo and Abia states by security operatives.

Comrade Emma Powerful, spokesman of the group, warned that IPOB may have no choice but to resist the Nigerian Army.

The statement reads in full:

“The Nigerian Army is at it again. Yesterday they shot dead two young men in Owerri.

“Last night and this morning they have commenced their abduction of Biafrans in Aba. Biafrans are now the longest suffering race in human history.

“One day the anger will no longer be controllable and the world will wake up then to start pontificating. Nigerian Army is conducting a stealth genocidal war against Biafrans and it is the responsibility of the world to take note.

“We have been made to feel that a Biafran life is worthless. Let these facts be chronicled for posterity because we shall reference them at the appropriate time. Any day we start, let the world not blame us. Those that gave the Nigerian army license to kill our people will regret it, them and their families.

“Nigerian Army must release those they abducted including a husband and wife they kidnapped this morning.

“Our decision to boycott elections is an act of civil disobedience which any reasonable person ought to understand. That Nigeria is an uncivilised backward society is not the fault of IPOB.

“We have chosen a civilised non violent approach but it appears Fulani Caliphate, their Jihadi Nigerian Army and Igbo Efulefus are hell bent on provoking us to pick up arms. When that eventually happens, the world should know those to hold responsible.”