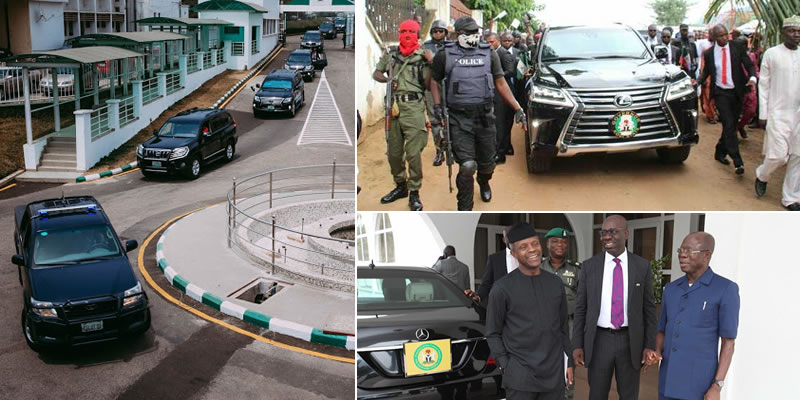 We bring to you the top 3 exotic cars used by our politicians and these include from the president, vice president, senate president and others.

An average Nigerian man loves to show off in wealth and affluence, no wonder the elders said, if wishes were horses, even the beggars will ride. Nigeria, a home to 170 million people is a nation you can’t but marvel at its diversity, our culture and our political terrain as a nation even confuse the foreign watchers.

According to the report released to the public in 2014, Nigeria legislators are the highest paid in the world, with a whooping sum of $1.7million for a senator and $1.45million for house in house of representatives. With these money they can buy things life wish to offer.

Taking a break from our legislators, our governors, ministers and other political appointees are not left behind in the jamboree. Nigerians love for cars can not be overemphasized, it was reported in the news recently of a man who owns 13 cars (as in seriously? 13 luxury cars).

Checkout the top 3 exotic cars used by our politicians as listed by AutoReportsNG;

From Pres. Buhari to Vice Pres. Osibanjo, Senate Pres. Dr. Bukola Saraki and other govenors, they have something in common, their love for Mercedes Benz products. Our investigation however reveled that about 80% of the govenors use Mercedes Benz as either their official car or they have it in the garage.

The president for example uses Armoured Mercedes Benz 550 4MATIC car as its official, same applies to the vice, the senate president and the list goes on. One may wonder, why Mercedes and why are these politicians stuck to this product? Mercedes Benz has craved a niche for itself when it comes to security, luxury and new innovations. Its a brand which has been tested, tried and trusted over the years, no politician will want to risk his/her life in an OEM car.

So far we have only seen two governors in the Range Rover brand, maybe its due to the reason that the brand is very expensive and not all governors can afford it, but two governors have stood out and were able to make it part of their official cars.

Gov Wike of Rivers state and Gov. Ambode of Lagos state so far are those ones we see driving this brand. According to an online report, this brand costs a whopping sum of (50-70million naira) to purchase.

Only the big boys can afford such. A look at these models is nothing short of beast, they are highly sophiscated to withstand any form of bomb or bullect attack. According to Ranger Rover’s website, The Sentinel is certified to VR8 standard against ballistic threats by QinetiQ, which means it can withstand 7.62 mm high-velocity, armor-piercing incendiary rounds, 15 kg (33 lb) TNT explosions, and DM51 grenades going off both beneath the floor and on the roof. In addition, there’s an anti-tamper exhaust, a self-sealing fuel tank, and an auxiliary back-up battery with a split charging system.

The most common SUV in every politicians garage is the Lexus brand. From Ogun to Lagos to Oyo to Imo almost all politicians love Lexus brand for its simplicity and luxury lifestyle. The brand according to reports costs within 50-100 million for its amoured version.

Source AutoReportNG
Share
Get News Via Whatsapp
Got news tip? send us story
Get Updates Via Telegram
Leave A Reply
Cancel Reply

Teenager Drowns While Taking A Bath In Kano

Jay-Z sues photographer for selling his pictures without permission

Video: Woman arrested for allegedly using her 7-year-old granddaughter as a sex slave