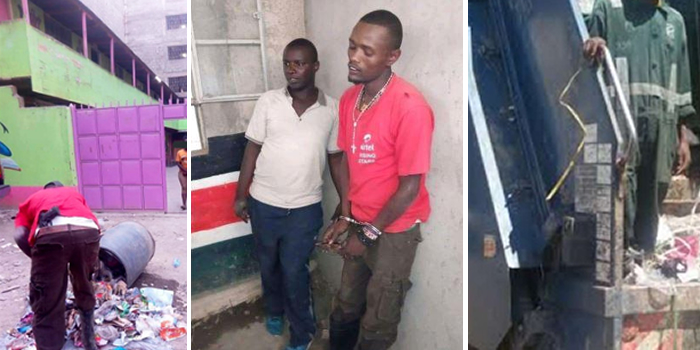 A garbage collector spotted with gun and whose picture went viral across social media, has been arrested. He was seen with the pistol at Nairobi’s Pipeline estate in Kenya.

According to the Directorate of Criminal Investigations, the ‘garbage collector’ was seized on Friday after the matter was brought to their attention by Kenyans on Twitter (KOT).

“A man who was photographed armed & the matter brought to our attention has been arrested & will be charged accordingly.

“We thank #KOT for bringing this matter to our attention & for additional information that we received through DMS. Let’s work together to keep our country safe,” DCI said on Twitter.

The post from the DCI however did not indicate the identity of the man or what he will be charged with.

In other news, the photos uploaded on Facebook showed the man in gumboots going through a trash bin.

People were left wondering who the individual with some speculating that he was a policeman and maybe he was only picking something from the dirt.

Since there was a picture of a woman inside a gate some distance ahead, who seemed to be holding her hands, some thought that he was a policeman with the woman in custody.

The people were left in panic wondering which estate the man could be in with the weapon which was placed carelessly.

Some argued that the man could not be a member of the armed forces since a police officer could not place his weapon that carelessly.

Sometime in the afternoon though more images circulated showing the individual had been arrested.

Details reveal that the individual is known as Alex Maina, and he was arrested together with a colleague of his known as James Kirucha.

Reports by the DCI revealed that both individuals are garbage collectors at Mukuru in areas of Pipeline estate in Nairobi.

The DCI also indicated that the two individuals were lucky to be arrested since they would most likely have been on the receiving end of worst experiences of getting themselves killed.

A review of the pictures offered by the authorities also found out that the gun in possession of the suspect was only a toy pistol with some knives.