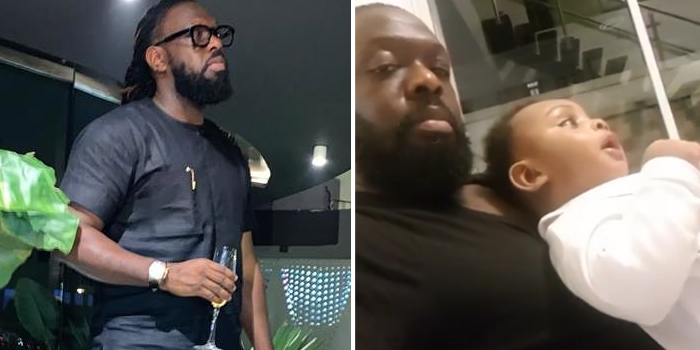 Timaya shows off his cute son in new adorable video

Singer Timaya is father of the moment with his most recent post. The excited father of three recently shared the most adorable clip of him spending time with his son. He has managed to gain the admiration of many internet users

Singer Timaya is the father of the year after sharing the most adorable video of himself and his cute son as they enjoy daddy-son time in his home.

Timaya has left many internet users surprised with his parenting skills especially after he once revealed that he is a better baby father than a husband. It was easy to believe him given that he is a proud baby dad of three children from two different women.

However, love and family is still very important to the singer and are values he holds very dearly. In his most recent post, the happy father shared a clip of himself and his cute son and stated that he was with his number one buddy.

Many people understand the value of a father figure in a child’s life and Timaya is playing his part to raise his young prince to the best of his ability.

Doubtlessly, for the Dem Mama crooner, after music, family comes next.

Me and my BUDDY😚😚😚 STOOPID

Meanwhile, musically, Timaya’s career is still at its peak. Just recently, the dance hall singer released a new song titled Balance and it is gaining momentum all over the internet.